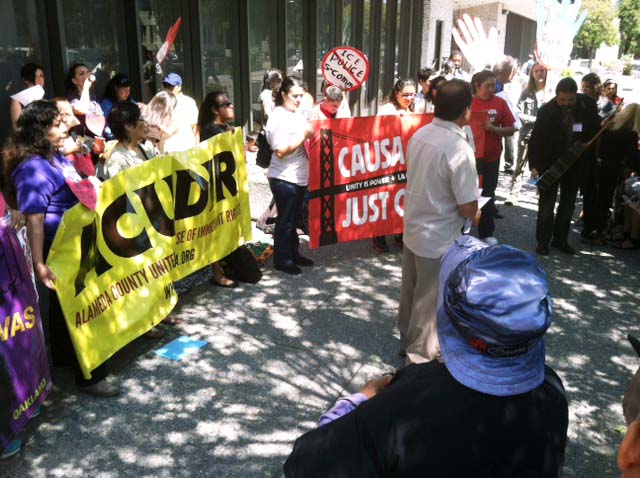 Following a spirited rally this morning led by community and faith groups and passionate testimony from scores of community members, the Alameda County Board of Supervisors approved a resolution calling on Sheriff Greg Ahern to stop the constitutionally dubious practice of holding people for extra time, beyond the point they would otherwise be released, just so they can be picked up for deportation. The Board approved today’s resolution by a vote of 3-1.

With immigration reform on the horizon, the continued deportation of community members who could soon be on the road to citizenship is generating increasing controversy across the nation. A broad coalition of Alameda County community, labor and faith groups, organized by the ACUDIR coalition,  is calling on the County to take national leadership by enacting a policy that ends cruel and costly ICE “holds” in the county.

If implemented by the Sheriff, “This policy will uphold key values of equality and fairness, keep families together, and strengthen relationships between communities and law enforcement,” said Ariana Gil Nafarrate of Mujeres Unidas y Activas.

Said Cinthya Muñoz, of Causa Justa :: Just Cause: “Today is an important one. Many people took time off work, school, and even bringing their families here to share how important this is and to encourage the passage of this resolution. It is one small step in the right direction to ensure that communities will be treated fairly.” 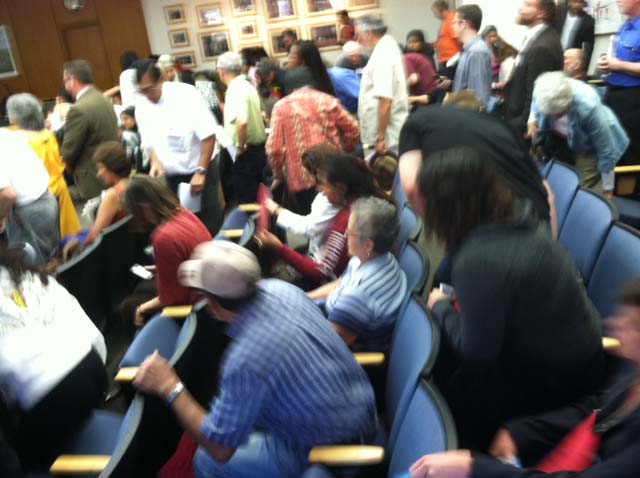 The resolution comes in response to extended detentions of community members in local jails, which have led to more than 2,000 deportations in the county since 2010.

The deportations have shattered families and eroded trust between immigrant communities and law enforcement. Immigration officials often take people before they have even had their day in court, and even victims and witnesses to crimes have been swept up in deportation proceedings.

At the heart of the problem are Immigration and Customs Enforcement (ICE) “holds” or “detainer” requests, frequently triggered by the controversial “Secure Communities” deportation program. Through the requests, ICE asks officials like Sheriff Ahern to hold people for extra time, at taxpayer expense, when they would otherwise be released. Throughout California, holds have led to needless prolonged detention of immigrant domestic violence victims, street vendors arrested only for selling food without a permit, and even U.S. citizens.

“Alameda County should take immediate leadership by enacting the strongest policy possible, since every ICE hold is a lawsuit and a constitutional crisis waiting to happen,” said Muñoz of Causa Justa::Just Cause.

Efforts are also underway to limit ICE holds with statewide legislation – as California’s TRUST Act advances, it has been copied in several states.  Advocates believe that leadership in Alameda county could advance statewide and even national efforts to curb deportations.