Renters are rising, organizing, and building a movement to win affordable, dignified, and sustainable housing for all. We know that only we can create a society where housing is not a commodity but a human right.

On June 8, renters, organizers, and allies from the San Jose to Santa Rosa, Sacramento to San Francisco came together to share strategies, visions and victories at the Regional Tenant Organizing network’s first Northern California Renter Power Assembly.  Almost 150 folks representing organizations from around the region turned out.  Check out the video by Roque Hernández and photos by Mike Dennis!

On July 13, organizers will have their first Southern California renter assembly; and a statewide Renter Power Assembly takes place in October. Across the country, thousands are coming together to build our strength as a movement for housing justice and organizing Renter Power Assemblies.

The Northern California Renter Power Assembly kicked off with an acknowledgement of all the recent victories around the state: Oakland’s Close the Loopholes victory which extends rent protections to 5,000+ more tenants; San Rafael, Marin, San Mateo and El Cerrito, which just passed just cause protections; East Palo Alto, where a measure to tax tech companies was approved; and in Hayward where there’s an ordinance for mandatory rent review (mediation) and a moratorium on removing buildings from rent control, and other tenant protections. 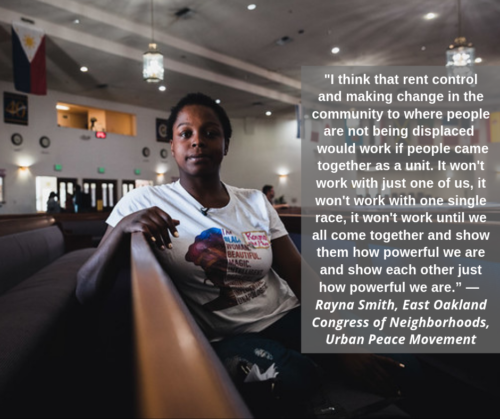 Tenants strategized over local rent control campaigns, ways to build tenant associations, how to organize and conduct direct actions, a deep dive into transformative organizing, a mapping activity of regional wins, long-term visioning and much more.

The effort to get rent control put in place is gaining support across the country.

On July 27, Homes for All which is part of Right to the City Alliance, will host an on-line member assembly to continue to build with each other across the nation. You can register here.

Our Homes, Our Future  written by PolicyLink, Right to the City, and the Center for Popular Democracy, notes that  “organizers, advocates and policy makers in six states (New York, California, Oregon, Washington, Illinois, Colorado) and two cities (Philadelphia and Providence) are considering some form of rent control legislation in 2019-2020 as public support grows for immediate solutions to protect the health, well-being and stability of low and moderate income communities.”

In fact some of the recommendations approved by the Northern California assembly included support for local rent control campaigns; a call for more trainings and workshops on organizing theory and practice; tenant skill-building workshops; a push for frontline communities to lead the alternative housing models movement;  and more.

Long term goals are of course, to push strong rent control policies in a majority of the states, housing for climate refugees, a tenant union in every city. A shorter term goal is to get Costa Hawkins repealed, a move for real rent control in California and for strong and powerful tenant groups to help push forward policies that will protect tenants and develop community land trusts in every California city.

Rooted in Home: Community Based Alternatives to the Bay Area Housing Crisis,

looks beyond the housing crisis to alternatives: community-owned real estate models such as land trusts and permanent housing cooperatives. The authors ask: How can California — the state with the world’s fifth largest economy — create models that tackle chronic housing insecurity and inequality. The report focuses on alternatives to the commodification of land and housing. 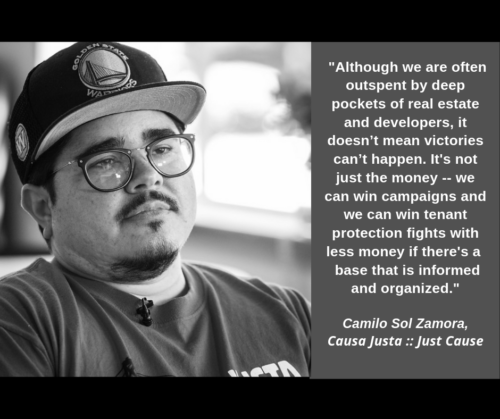 The current crisis demands that we question old assumptions, discuss alternative visions and policies, and move boldly in a different direction. we know that current approaches are not working and show no promise of working in the future. Change is clearly needed, and the time to start is now.”

Communities across the country face a renter affordability crisis. The percentage of people in this country who rent their homes is rising, while fewer can afford their rent.

“In a world fundamentally shaped by race, class, and gender inequality, the housing market has been an efficient mechanism for reproducing these same injustices across generations. This is why land and housing remain disproportionately concentrated in the hands of historically privileged groups. We see that even by the most conventional measure— private home ownership—the market has failed Black and Latinx households.” —Rooted in Home

Although fighting for these protections is difficult because of all the money funneled by big real estate to protect the interests of corporate landlords, wins against great odds are clearly possible.

“We have to continue to deepen organizing, continue to build the base throughout the state. Although we are often outspent by the deep pockets of real estate and developers who saturate the airwaves with confusion and lies, it doesn’t mean victories can’t happen. In Oakland for example, ballot Measure Y campaign was  outspent 17 to 1 by real estate developers from and outside the state and we still won. It’s not just the money — we can win campaigns and we can win tenant protection fights with less money if there’s an organized base that is informed.” said Camilo Sol Zamora, of Causa Justa :: Just Cause

Said Sol Zamora, “More of these small towns and big mixed income cities are really fighting for tenants. Tenants of different ethnicities, of different class, coming together. If you look inside the assembly and see who’s there it’s really inspiring. that draws hope. I think these assembly models are really important part of connecting people on the local regional level and then the state level. Those connections are key.

Adds Davin Cardenas, Right to the City Alliance National Housing Organizer: “These assemblies are taking place to begin organizing the renter class in a large scale way so that we actually have more power to shift the political dynamic in the cities where we live.”

As Rooted in Home concluded: “community organizations, advocates, and policymakers are sharing strategies to challenge supply-side arguments that we can build our way out of the crisis, and to create solutions that imagine a new system based on the right to housing.”