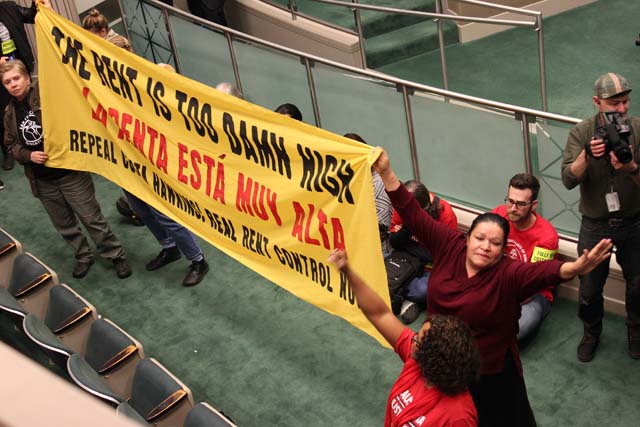 SACRAMENTO—Hundreds of renters, organizers and housing rights allies streamed into the Capitol Jan. 11, for the first committee hearing of A.B. 1506, a bill that would have repealed the deeply controversial Costa Hawkins Rental Housing Act. Following several hours of tense discussion, testimony, and public comment, the Committee moved in a 3-2 vote, with two assembly-members abstaining, not to move forward with the repeal of Costa Hawkins.

“This battle is not over,” says Camilo Sol Zamora, co-director of Housing, Land & Development at Causa Justa. “We may not have gotten the right vote today from our elected officials, but we’re ready to keep fighting for real rent control throughout the state.” 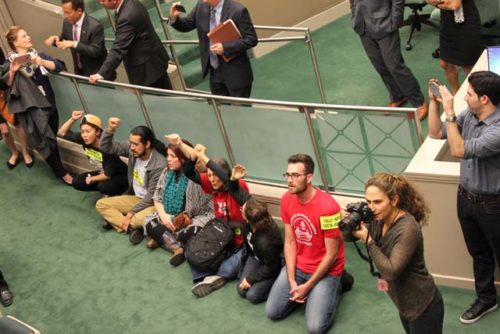 After the failure to pass, shouts erupted in the chambers and several banners were unfurled. Renters, organizers and allies filled the room chanting “Housing is a human right! Fight, fight, fight!” The huge group then made their way down the stairs to the rotunda for a boisterous expression of anger and promising to keep working to get Costa Hawkins repealed.

“We’re getting displaced, evicted, seniors, families, and disabled folks are being kicked out of their homes. Rents are rising to market rates so that friends and neighbors have to leave the neighborhood, they have to go to Tracy, Stockton, Sacramento and commute every day to get to work. It’s ridiculous,” said Momii Palapaz, Causa Justa member and volunteer.

Since its passage in 1995, the Costa-Hawkins Rental Housing Act has allowed landlords to raise tenant rents without limit on properties not protected by municipal rent and vacancy control ordinances while simultaneously limiting the ability of local jurisdictions to counteract these measures.

“The state should not be imposing on local governments what they can and cannot do to address this crisis,” said West Hollywood deputy city attorney Allison Regan, who testified on behalf of A.B. 1506. 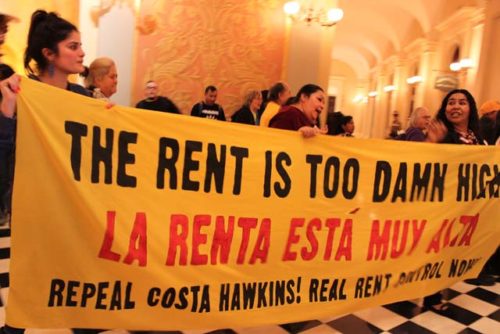 Downstairs in the rotunda

In combination with the ongoing affordable housing crisis in the state, Costa Hawkins has exacerbated the devastating impact of evictions, rent increases, and vacancy control particularly on marginalized populations across the state.

With enormous housing costs, California has the largest poverty rate in the country with over 30 percent of all renters paying 50 percent or more of their monthly income in rent, according to Assemblymember David Chiu, D-San Francisco

“As we’ve seen throughout California, rental housing affordability is outpacing income growth at a level that is unsustainable,” Chiu said. 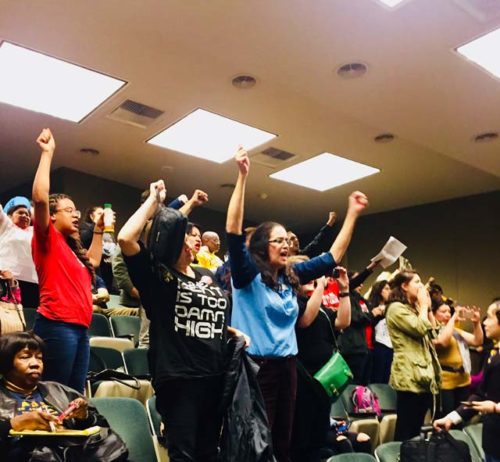 As expected, many of the same parties that backed the original passage of Costa-Hawkins in 1995 were there in force on Thursday to oppose the repeal, including representatives from the California Apartment Association, California Association of Realtors, and other industry lobbying groups. These industry representatives were joined by an estimated 700+ landlords from across the state, a majority of whom appeared to have been bussed in from San Francisco and Bay Area cities.

Testimony offered by industry representatives used the same old tactics of fear to influence assembly members that rent control would “decrease the supply of housing stock in the state,”  and “deter new construction” and “induce landlord withdrawal from the market.”

While bill author Assemblymember Richard Bloom, D-Santa Monica, repeatedly contended that there were no studies to support this, the opposition successfully swayed several members of the committee. 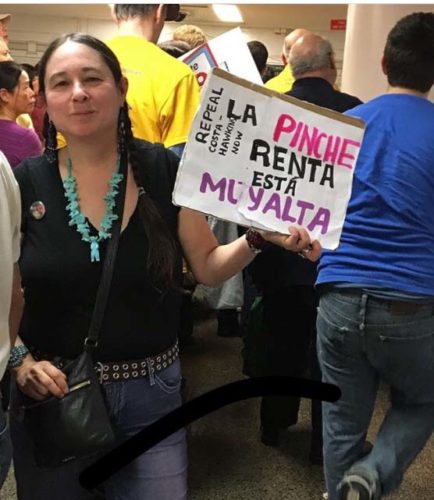 This dismissal was embodied in an exchange between industry rep Debra Carlton of the CA. Apt. Assoc. and bill co-author Chiu. The former anecdotally noted that the repeal of Costa-Hawkins and expansion of rent control options would limit her children’s ability to find housing in the future. Chiu countered that if Costa-Hawkins were NOT repealed and the stock of rent controlled housing continued to diminish over time, his children would be unable to AFFORD housing in the future.

The gathering reflected mounting tensions over the housing crisis across the state with over hundreds offering public comment on both sides of the debate. While comment was limited to one’s name, affiliation, and yes or no vote, many members of the public took the opportunity to briefly share their stories of astounding rent increases and evictions as a result of Costa-Hawkins, as well as those of ‘small’ landlords trying to maintain their livelihoods. 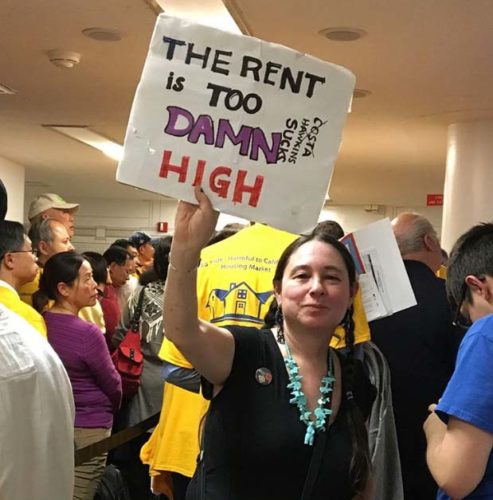 The fight to repeal Costa Hawkins is far from over. As the votes came in Thursday, tenant organizers with Causa Justa and allied organizations were already strategizing about how to get the bill onto the 2018 ballot, putting the issue directly into the hands of voters.

“The bill died in committee, but the conversation about rent control…the only solution to this displacement crisis…is just getting started,” Preston said.