All looks but no substance. That’s the consensus by immigrant rights groups, including Causa Justa :: Just Cause, on the recent reforms to the Secure Communities federal deportation program announced by the Obama administration June 17. 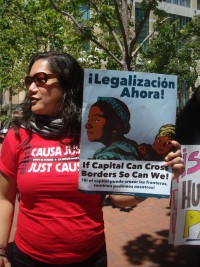 The S-Comm reform announcement acknowledges grave problems in S-Comm’s design and implementation but falls short of the moratorium on the program expected by lawmakers and immigrant rights advocates who have severely criticized the program. They cite its lack of transparency and undermining of public safety by silencing victims and witnesses afraid to report a crime because fear of deportation.

“Anything less than a moratorium is unacceptable,” says CJJC’s immigrant rights organizer Cinthya Muñoz Ramos. “We are outraged by the inadequacy of this response. S-Comm criminalizes immigrants, it endangers community safety, and threatens civil rights of communities of color.”

Immigration and Customs Enforcement (ICE) director John Morton said in a June 17 conference call that the agency was “addressing a number of concerns raised by advocacy groups, NGOs (non-governmental organizations), and the civil rights community to make the program the best it can be.” This includes a new policy addressing the victims and witnesses of crime with a focus on victims of domestic abuse.

Recently these cases have been the focus of much attention when domestic violence victims were swept up into the detention system after calling police for help.

In addition, according to Morton, a memo has been issued on the appropriate use of prosecutorial discretion by ICE officers and agencies, meaning they don’t need to bring a case to court if the case is compelling. The agency also stated it would focus its limited resources on the most serious criminals; as well as respond to any potential civil rights concerns; put in place more training for law enforcement; and form an advisory group.

The announcement comes in response to growing criticism about the program.  Illinois, New York and Massachusetts have either pulled out or refused to participate in the program. The program launched March 16 last year in Southern California’s Orange County.

In February, as a response to a host of questions and inconsistencies over the program, Assemblyman Tom Ammiano, (D-San Francisco) introduced SB1081, better known as The TRUST Act. The bill is gaining support and recently passed the California Public Safety Committee June 14.

The TRUST Act would reform the way California participates in the program. Among other things, it would set safeguards against racial profiling and ensure that children and domestic violence survivors are not swept up for deportation. It also allows local governments to decide whether they want to participate in the program. 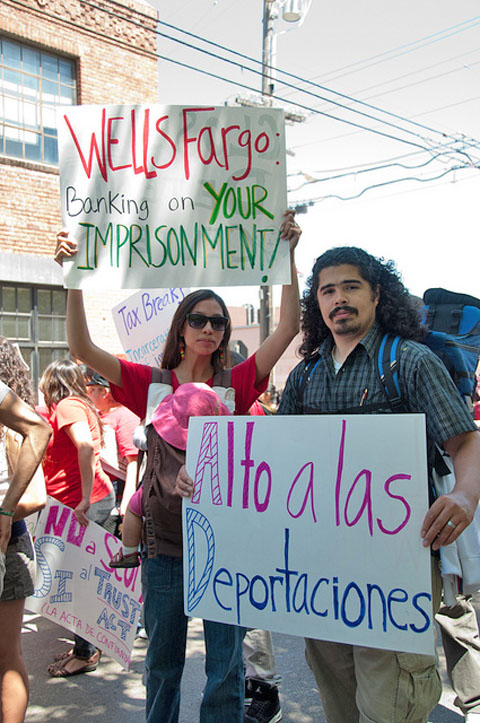 “S-Comm’s serious flaws have become crystal clear. This troubled program is undercutting community-based policing and striking unnecessary fear into the hearts of hard-working community members across the country. The TRUST Act is a practical solution that will re-build trust with our immigrant communities and will restore some balance to this dysfunctional and unjust program,” said Ammiano.

Southern California Senator Ron Calderon (D-Montebello) cited statistics showing that more than two thirds of Californians deported under the program had no convictions or were picked up for charges as minor as traffic violations.

Calls build to pull out of S-Comm

The  Congressional Hispanic Caucus and Progressive Caucus as well as seven California Congressmembers have called for a moratorium on the program pending an investigation by the Office of the Inspector General called for by Rep. Zoe Lofgren (D-California) scheduled to begin next month.

“Contrary to the administration’s claims, S-Comm undermines our shared goal of having a unified and reformed federal immigration policy. By delegating federal immigration authority into the hands of thousands of different state police, the federal government is guaranteeing the fragmentation of immigration enforcement,” said Chris Newman, Legal Counsel for the National Day Labor Organizing Network (NDLON)

The National Day Laborer Organizing Network (NDLON) is a plaintiff in (//uncoverthetruth.org/) an on-going FOIA lawsuit against DHS/ICE for access to documents related to the Secure Communities Program.

In recent weeks Illinois, New York, and Massachusetts have either pulled out or refused participation in the program while numerous cities across the country have sought a way out of the deportation dragnet that commandeers local law enforcement and entangles them in immigration laws.

As a bill to regulate and reinforce the voluntary nature of S-Comm, the TRUST Act, is expected to pass the California Senate.  Los Angeles and Oakland both passed resolutions seeking out of the program.


View S-Comm Deportations around Bay Area in a larger map

Local sheriff steps up his game

San Francisco City and County sheriff Michael Hennessey has been a vocal critic of the program and criticizes ICE for being unclear about whether cities could opt out of the program.

Last month he announced that he would no longer hold undocumented immigrants who are brought in to county jail on low-level misdemeanors for ICE agents. Normally, someone brought in on misdemeanor charges such as trespassing or holding small amounts of marijuana, signs an agreement to appear in court at a future date. The policy upholds San Francisco’s sanctuary ordinance — which prohibits local officials from assisting ICE with enforcing immigration laws unless a felony is involved.

CJJC is continuing to work to stop S-Comm’s harsh impact on communities in Alameda and San Francisco counties, holding forums and Know-Your-Rights workshops on both sides of the bay. Since the Trust Act was introduced in February, CJJC along with many other immigrant rights organizations and allies, has closely followed the proposed bill, attending hearings and talking with lawmakers in hopes of seeing its passage.

Background information on the Secure Communities program is available at //ndlon.org/pdf/scommbrief.pdf