Landlord Harasses Tenants in a 9-unit Building on 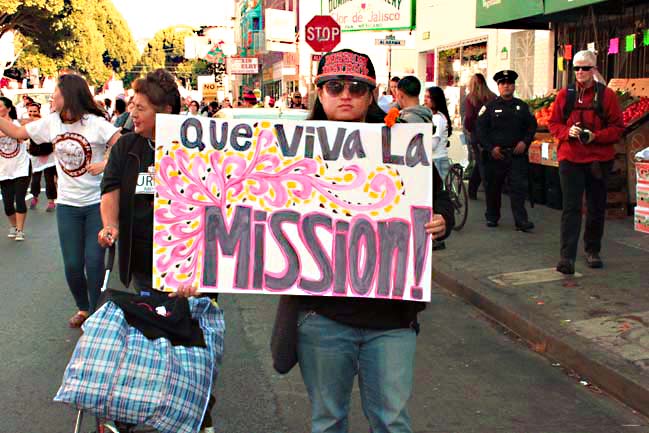 SAN FRANCISCO, CA–Tenants at 2870-2878 Harrison St. will be having an action at the office of their current landlord to protest the constant harassment and pressure to move that they have been facing since the landlord bought the property in June.

The Harrison Building is a 9-unit building that houses over 50 adults and 20 children. Many of these families have lived in the building for more than 25 years and for many of the children and youth, this is the only home they have ever known.

The new landlord, Fergus O’Sullivan, bought the building in June and two weeks later sent all the units buy-out offers and threats that they would be served with an Ellis Act eviction if they didn’t take the money.
The tenants were scared, and many of them being monolingual Spanish speakers thought that this letter was an eviction notice.

But they came to Causa Justa :: Just Cause where our counselors informed them about their rights, and realized  that no eviction was taking place, and began organizing as a building to protect their right to stay.

They sent Mr. O’Sullivan a letter informing him that no one was interested in taking the buy-out money or moving, that their homes and their rights as tenants were worth more than anything he could offer.

Since receiving the letter, Mr. O’Sullivan has continued to come around the building, continued to offer even larger sums of money for the tenants to move.

This constant harassment and pressure has resulted in 3 of the 9 units being now vacant.

He is now remodeling these vacant units and will most likely rent them out at market-rates (for anywhere around $5,000 — a rough estimate of the current average for a 4-bedroom unit in the Mission).
This remodeling is happening Monday-Saturday beginning at 7am. There is currently scaffolding up the entire front of the building, which is blocking the light from coming in most of the unit’s windows.

The Harrison Buildings back entrance is through Balmy Alley, which has one of the highest concentrations of murals in the city and is a rooted in historical and artistic history. The murals are protected if they are copyrighted.

When Mr. O’Sullivan took possession of the property he did not change the water account into his name and it wasn’t until the tenants informed him that the city was threatening to shut their water off that he took action.

There was also regular cleaning of the front part of the building as well as pest control; both services have been discontinued since Mr. O’Sullivan took possession of the building.

It appears that through Mr. O’Sullivan’s actions, his goal is to empty the building and not be a good landlord for the families who have been living there for more than 25 years.

Mr. O’Sullivan’s actions show the kind of speculative housing market San Francisco is currently in, profits are more important than people and buying, emptying and flipping entire buildings regardless of the impact on people and neighborhoods is not taken into account.

As Ramona, 15 years old, told CJJC counselors, she was born in the building as were her sister and her cousin. All three of them have worked incredibly hard to be able to get scholarships to prestigious private schools in San Francisco, if her family has to move, she may lose her scholarships.

“I am a sophomore and I have been trying to focus on my studies but it has been so hard since all this started. I was a straight A student last year and now my grades are slipping. I am stressed, I am worried. I have lived here all my life and it’s not fair that we would have to move because this guy wants to make money. I want to tell Mr. O’Sullivan that we are people and he can’t treat us like this.”
On Thursday Ramona, as well as other tenants in the building will get to do just that.