Homes for All campaign opens in Oakland: SF Chronicle 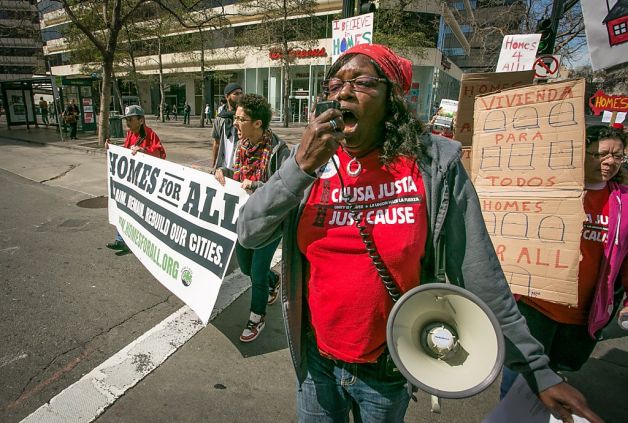 Saying that housing is a basic human right, about 75 protesters gathered in downtown Oakland Wednesday as part of the new Homes for All campaign. The grassroots movement, launched with similar events in 11 cities nationwide, asks President Obama and other elected leaders to develop a plan to expand and protect affordable housing.

Oakland resident Alma Blackwell laid out some of the advocates’ demands as she stood in front of a bright red cardboard model “home” the size of a child’s playhouse on Frank Ogawa Plaza, where many of the protesters recalled having gathered for Occupy protests.

“We want Fannie Mae and Freddie Mac to turn 100,000 bank-owned foreclosures over to nonprofits to convert to deeply affordable housing for low-income people,” she said to chants of “Si se puede/Yes we can.”

“We want Fannie and Freddie to contribute $5 billion toward a national housing trust,” Blackwell told the crowd. “We want principal reductions for all underwater homeowners with Fannie and Freddie loans. We want to see Edward DeMarco replaced,” she said, referring to the head of the Federal Housing Finance Agency, who opposes reducing mortgage principals to make them more affordable.

The nonprofit groups in the Homes for All campaign ( www.homesforall.org), which include Cause Justa, the Alliance of Californians for Community Empowerment and Tenants Together, also want to see $5 billion allocated for the National Housing Trust Fund, HUD and Section 8.

An array of speakers discussed problems with either apartments they rented or homes they owned that led to eviction or the threat of it. The protesters then marched across Broadway to hold a rally outside a Chase bank branch, symbolizing their displeasure with how big banks have responded to the foreclosure crisis.

“After my parents died, I took out a loan to fix up the house we’ve had for 40 years,” said Minnie Galloway, 74, of Oakland. “I didn’t realize it was a predatory, interest-only loan that would keep changing and changing higher.” Her pension from the Veterans Administration medical center where she was a nurse’s assistant couldn’t keep up. A year in arrears, she’s now seeking a loan modification. “I’m just trying to keep the old body and soul together,” she said.

Ana Gutierrez, 66, also faces losing her longtime home in San Francisco – to an Ellis Act eviction in which landlords state they no longer want to rent their property. Gutierrez lives in a four-bedroom apartment in the Mission with her two sons and a friend. Their $905 monthly rent – kept low by a rent-control ordinance – wouldn’t begin to cover even the cost of a studio in a city where housing costs have skyrocketed.

The protest came two days after the National Low Income Housing Coalition‘s annual report on housing affordability, called “Out of Reach.” The group said that California is the nation’s second-most-expensive state (after Hawaii) for renters. A minimum-wage worker must work about 130 hours a week to afford a two-bedroom rental, it said. San Francisco, San Mateo, Marin and Santa Clara counties were among those singled out as particularly expensive.

The rally highlighted a specific source of funding to help bolster housing. DeAnn McEwen, co-president of the California Nurses Association/National Nurses United, spoke on behalf of the “Robin Hood Tax,” which would be levied on Wall Street trades to generate $350 billion a year for social services, including housing, health care, environmental issues and other causes.

“Small change for the banks will mean big change for people right here in Oakland and all across America,” she said. Backed by an array of progressive groups, the legislation is sponsored by Rep. Keith Ellison, D-Minn., as the Inclusive Prosperity Act, HR6411.