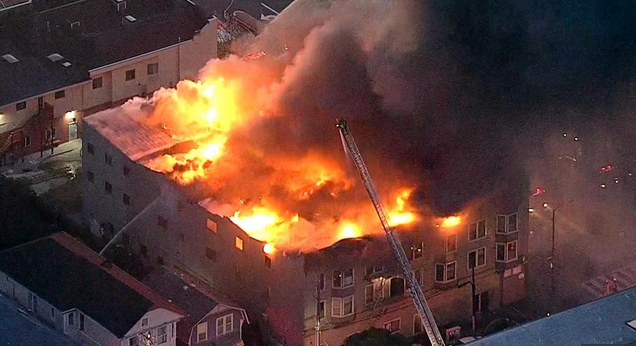 Our hearts are heavy and they go out to the loved ones of the three tenants who lost their lives as a result of yesterday’s San Pablo Ave apartment building fire, as well as to the tenants who sustained critical injuries, and all tenants who were part of the Urojas Community Services program, veterans, formerly incarcerated, and formerly homeless residents who now find themselves displaced and homeless, many once again. More than 100 people now have nowhere to live and we are seeing yet another Oakland fire that has impacted poor, low-income tenants, particularly Black residents in the flatlands, when such tragedies could be avoided.

Was the horror of the Ghost Ship fire in December not enough to move city officials to fast track a proactive code enforcement model for the city? Is the Oakland housing crisis not enough to adequately fund the Tenant Protection Ordinance? And here we are again, another fire not four months later, where clearly, dangerous and deadly violations were present, with multiple inspections, and violations not remedied or enforced.

The East Bay Express reports building conditions and safety risks at 2551 San Pablo Ave apartment led to an inspection back in 2013. A City of Oakland housing inspector visited the apartment and “cited the building’s owner for ‘hazardous and injurious’ conditions” and fined the building owner. What were the outcomes of the inspection three years ago that left the building in the same condition or worse? This is not acceptable and sadly more people will be injured, and more lives lost if the City fails to act on programs and services that seek to uplift people’s health and quality of life over profit.

In our renter majority city, we must have a proactive code enforcement model that is well-resourced, strategic, collaborates with community partners, takes into account the multiple language needs of our diverse Oakland population, takes into account unintended consequences such as tenant displacement, and is just to tenants who bear the brunt and burden of living with deplorable housing conditions for many months, often years.

Data from the Alameda County Public Health Dept. shows that:
* Between 2003-2013, there were over 60,000 code enforcement complaints in Oakland. Residential code complaints account for 85% of all complaints.
* The largest numbers of complaints are nearly all in the city’s flatland neighborhoods.
* Many habitability/repair problems go unreported by tenants who are fearful of retribution (harassment by the landlord, rent increases, eviction, and deportation)

Low-income tenants should not have to choose between being homeless and living in deplorable conditions just so they can have access to shelter. Housing should not be seen as a commodity but a human right.

The City has more than enough information for the kind of program needed after years of recommendations provided by tenant advocates & policy groups, and demands by the county’s public health department that a proactive rental inspection model be put in place. Proper enforcement of the Code Enforcement Relocation Ordinance must go hand in hand with major building repairs due to code violations.

It’s not enough to only build truly affordable housing. We must do all we can to protect existing renters right now, in particular our most impacted residents – our elders, young people, and Black tenants and families who are being displaced from Oakland at alarming rates, and who are facing health impacts from living in homes and neighborhoods with sub-par conditions. We must push and demand that City Council pass all the necessary tenant protection policies that will preserve and stabilize poor and working-class residents and families.

Tenant Protection Ordinance
In 2014 the Tenant Protection Ordinance was approved to help tenants address and resolve major harassment cases. However, the city has yet to fund the administrative program of it so it is an ordinance without teeth — the very teeth needed that would have helped the residents at the San Pablo apartment building, who the East Bay Express reported, endured major harassment by the building owner, and who with the help of 12 men, brutally tried to remove tenants and their belongs, — attempting to illegally evict tenants and circumvent the court eviction process. The city must do better to enforce the laws we have already passed.

The City must also ensure that it is adequately funding housing counseling, and legal defense for low-income tenants at-risk of homelessness and displacement from Oakland due to invalid rent increases, evictions, and for repair requests on their homes. We know we can’t leave it up to outside developers, a speculative real estate industry that is fueling gentrification and displacement, and those landlords who seek to exploit tenants for maximum profit

Low-income tenants should not have to choose between being homeless and living in deplorable conditions just so they can have access to shelter. Housing should not be seen as a commodity but a human right. It’s time for the City to step up and protect our most vulnerable tenants, not just talk about it.