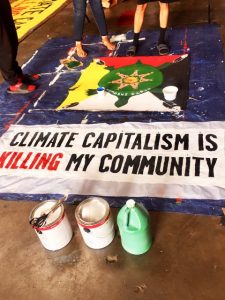 On November 8th, just two months after a coalition of indigenous and frontline communities gathered in the Bay Area to work on community-led solutions to the escalation of climate change and its severe impact on housing and land, the deadliest wildfire in the U.S. in 100 years burned with ferocious intensity in Butte County, California.

The Camp Fire completely destroyed the towns of Paradise and Concow, home to almost 26,000 residents, burning through 153,336 acres and leaving 85 people dead and wiping out almost 19,000 structures. It burned so fast residents had very little time to escape, some with flames licking at their heels.

Dead trees, infected by beetle bugs—the result of California’s drought—served as tinder for the fire. The fire pushed heavy smoke and toxic pollution into areas as far as Santa Cruz and the Central Valley, and residents in the Bay Area and Central Valley dealt with school and business closures for days. People scrambled to find masks and air purifiers, all of which quickly sold out.

Just the year before, the Tubbs Fire whipped through Sonoma County, destroying 5,636 structures, burning through 36,807 acres and killing 22 people.

In the aftermath of these disasters, thousands of people are now left without a place to live. And sadly, as environmentalists, climate justice advocates and indigenous people have warned, our landscape is changing and this is becoming the “new norm.” 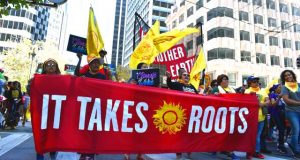 As grassroots housing and environmental justice organizations in the San Francisco Bay Area, we and thousands more people from indigenous and frontline communities around the U.S and the world gathered in San Francisco this past September for the It Takes Roots’ Solidarity to Solutions (Sol2Sol) convening.

We know that the fight for truly affordable and safe, dignified housing and tenants rights is intrinsic to the fight for our planet. Through base-building, we empower Black, Latinx, Asian, immigrant, and refugee communities to create positive, healthy change in our cities. We organize across the state so people can remain in their communities and have resources and access to dignified, safe, and truly affordable homes.

Throughout the week, we shared community-led solutions, such as community-owned and managed renewable energy resources, community stewarded food projects, and land trusts for affordable housing and sacred sites that are stewarding a Just Transition away from an extractive economy that poisons the land and people for profit.

Hundreds of activists blockaded the summit to demand that elected officials follow the leadership of communities on the front lines fighting climate change. This means phasing out oil and gas production and investing in community-owned, 100 percent renewable energy resources starting in the neighborhoods that corporations have poisoned and polluted.

“In the wake of the California fires and other disasters, the same corporations and folks fueling these false climate solutions are the same ones who started rent gouging and plotting corporate land takeovers after disasters, such as here in the North Bay, Puerto Rico, Texas, New Orleans, and Haiti,” said Alma Blackwell, veteran housing rights organizer at Causa Justa.

After a climate crisis, residents under threat of displacement lose the ability to take care of one other and rebuild. These plans exacerbate the injustice that already exists because the communities with the fewest material resources to prepare for and recover from disasters are often the worst hit. Climate capitalists descend like vultures with enormous rent hikes, buying homes from traumatized residents, razing them and constructing expensive housing.

But when people have been living somewhere long enough, they are can rebuild their communities faster and stronger. In New Orleans post-Katrina, the Vietnamese community rebuilt quickly—not because they had the most resources—but because they had built deep relationships. 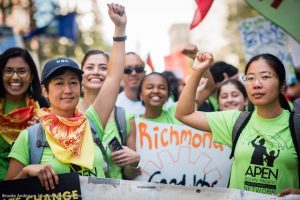 Elders with the Asian Pacific Environmental Network (APEN) and CJJC members attended the Shellmound action in Berkeley, where they learned about the sacred land the Ohlone people are fighting for. This education grounded the delegations in the long, ongoing struggle of indigenous peoples with those of other groups around the world.

Causa Justa :: Just Cause took participants to Bayview-Hunters Point where homes occupied by mostly Black and Pacific Islander residents are located near a Superfund site. Many residents have experienced cancer, asthma, and other debilitating diseases connected to the area’s soil toxicity and bad air quality. To this day, much of the land there is still toxic. APEN and other members of the Our Power Richmond Coalition led delegates through Richmond and West Contra Costa County where six major refineries are operating and looking to expand in order to refine tar sands oil. 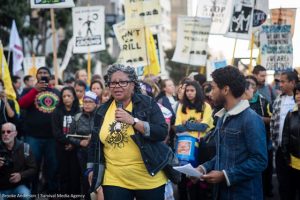 Nathanette Mayo of the Black Workers for Justice and Fruits of the Labor World Cultural Center in North Carolina. Photo by Brooke Anderson

“All of these movements are interconnected. For example, if you are looking at workers in a workplace … the chemicals they may be using are not only poisoning themselves but end up poisoning the community. We look at connections like worker rights, housing rights, gentrification, [which are] going on around the country and workers are not able to live in the cities they work in—they cannot afford housing. We have to be active on several fronts and mindful of that and in alliance with various types of organizations,” said Nathanette Mayo, President of UE Local 150, NC Public Service Workers Union; Black Workers for Justice and Fruits of the Labor World Cultural Center in North Carolina.

Transforming Our Future
At the heart of our movement is discussion of how we can free the commons: how the people who are most impacted get to develop plans, make decisions, share governance, and move away from ownership and the private market toward real democracy.

Our vision is an economy rooted in principles of solidarity, participation, cooperation, and reciprocity to transform development in our communities, our cities, and beyond. We have the solutions and now, need more people to invest in them instead of those that harm communities and the environment. 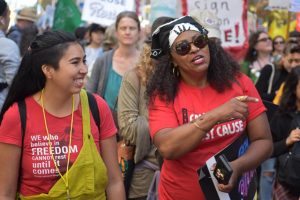 Throughout the six day Sol-2-Sol convening, indigenous people from the occupied U.S. territories and lands from around the world led many of the actions and activities, especially those who were directly impacted by some of the harmful proposals discussed at Gov. Brown’s Summit. 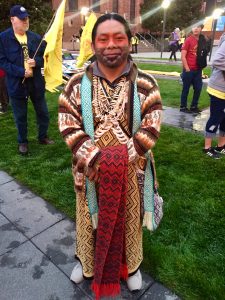 Chief Ninawa, president of the Federation of the Huni Kui people. Photo by Rose Arrieta

Chief Ninawa, president of the Federation of the Huni Kui people who traveled from the Amazon Rainforest of Acre, Brazil, said, “…the truth is, we can transform reality. We can change this world because we are the majority. Our prophecies told us that this is a difficult time, a challenging time but it is also a time of great hope precisely because of our unity and precisely because of the power of the possibility of our journey forward together.”

Check out more photo’s from CJJC at Sol2Sol week here.