Signup to attend the action by clicking here. 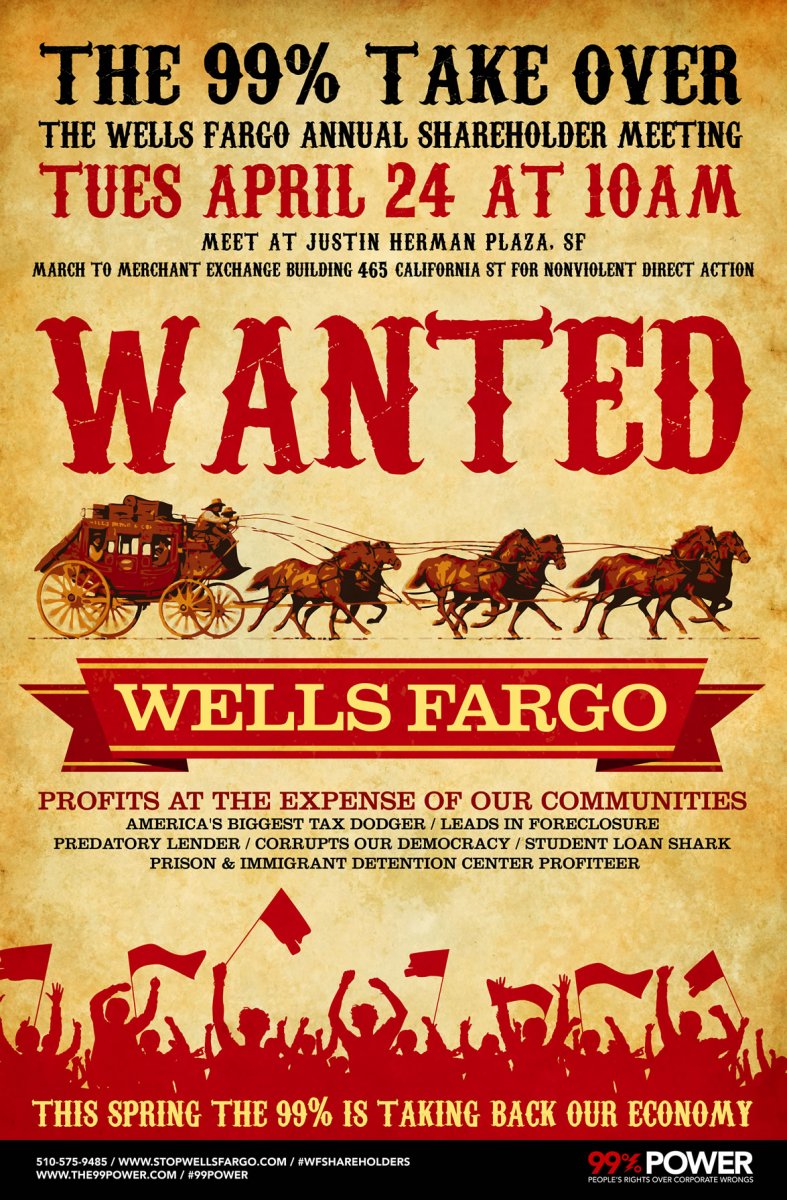 Wells Fargo has hurt millions of people around the country with their bad practices. Almost every section of our communities have been impacted by this bank and there are so many reasons why you need to come out and stand up to them.

On Tuesday, April 24, the 99% who have been devastated by Big Banks’ bad practices are stopping Wells Fargo Shareholders from having their same old Annual Meeting.

Instead of them discussing how they are going to continue to profit off the devastation of communities of color, we will be holding a Peoples’ Stakeholder meeting to share the stories of those of us most impacted by Wells Fargo’s greedy, racist practices.

Someone you know has been hurt by Wells Fargo, whether they are a senior fighting to save their home, a student struggling to afford school or a husband fighting to keep his wife from deportation and his family intact.

Enough is enough! We need to let them know that we will not stand by as they continue to hurt our families and communities.

Wells Fargo Bank is responsible for some of the worse abuses of public funds and resources. It has received $43.7 billion in bailout funds, but continues to foreclose on families and neglects to pay taxes.

One in five foreclosures in the nation are concentrated in California and Wells Fargo owns a significant portion of loans that they have allowed to go into foreclosure.

Their application of the federally approved Home Affordable Modification Program, (HAMP) which aim to lower monthly payments so that distressed homeowners can avoid foreclosure, has been negligible.

Numbers for Wells Fargo as of Feb 2011 show that only 77,402 homeowners got permanent modifications: a 22% rate of modification more than two years into the program.

Not only that, over the last ten years, Wells Fargo paid the lowest worldwide tax rate of the top five big banks (24.8%–$27.5 billion on $110.9 billion pre-tax earnings) and reportedly did not pay any federal taxes in 2009.”

Wells is no friend to immigrants either. In fact, it is a prison profiteer. As of December 31, 2010, Wells Fargo had $88.7 million, or 4 million shares invested in the GEO Group, the nation’s second-largest private prison company, and $5.9 million, ½ shares, in CCA (Corrections Corporation of America), according to Security and Exchange Commission filings. Their combined prison holdings are valued upwards of $120 million. GEO and CCA spend millions lobbying against comprehensive immigration reform and for anti-immigrant legislation and share the same lobbyists in Washington D.C. firm, The Podesta Group.

Private Prisons receive an average of $122 a day per person in detention. The average number of people in detention is 30,000, which costs taxpayers over $3.7 million daily. HB87 is expected to create record profits for private prison companies, Georgia is already home to the largest detention center Stewart Detention Center in Lumpkin (1752 capacity).

Wells Fargo uses its mutual funds, the money deposited by its clients, to invest in these private detention corporations. Wells Fargo is undermining San Francisco’s status as a sanctuary city by profiting off the criminalization of immigrants with immigrants’ own money.

Wells Fargo has its hands deep in this nation’s pockets and continues to take far more than its fair share. From homes, to interest on payday loans, to priosns and detention centers, to student loans to tax dollars, Wells Fargo’s profits
at the cost of our communities.

So join us on April 24, when we let Wells know that in their single-minded pursuit for profit, they are bankrupting the 99%!

Signup to attend the action by clicking here.