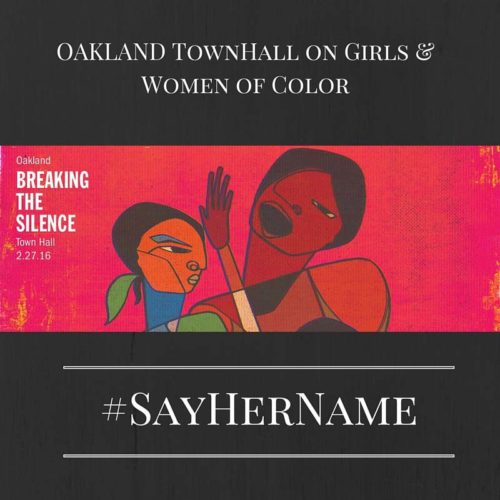 On Saturday, Feb. 27th, 2016, I attended the Breaking the Silence Town Hall at Impact Hub here in Oakland. The town hall was one of the most powerful gatherings in which I have ever been present. Stories of criminalization, school push out, sexual assault, state and domestic violence, poverty, displacement, patriarchy and sexism, juxtaposed against hope, perseverance and healing, filled my spirit.

Breaking the Silence Town Hall—an initiative of the The African American Policy Forum— was part of the national series of forums focused on elevating the experiences of women and girls of color across a range of issues. It was the culmination of the “Conjure Circle” Series, produced over six months of artivist (artist + activist) programming highlighting the #SayHerName campaign inside of the #BlackLivesMatter movement. The series has previously held similar sessions in cities across the U.S., including: New York, Los Angeles, Miami, Washington D.C., Baltimore, Chicago and Atlanta.

The town hall, in which Causa Justa’s Alma Blackwell participated, was divided into four components: interpersonal and inter-communal violence, education, displacement and gentrification, and our criminal and legal system. 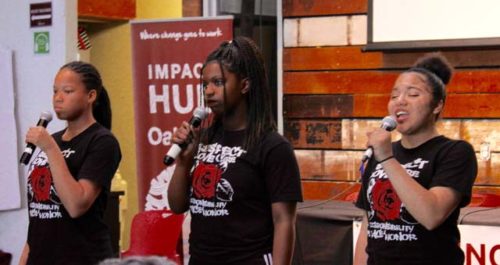 Youth from the Destiny Arts Center

Interspersed between these panels were truly inspiring and breathtaking performances, including by students of the DESTINY Art Center, Black Lives Matter movement leader and founder of the Anti-Police Terror Project Cat Brooks, and the Deep Waters interpretive dance troupe.

I was immediately inspired by the diversity and sheer number of people present I was reminded of what makes Oakland so special: not just its unique diversity, but the motivation and solidarity I witnessed to address housing, state violence, gender violence, education, as well as to elevate the voices of the most marginalized— in this case, women and girls of color (“women” and “girls” being defined not as exclusively those assigned female at birth but as anyone who identifies as female and chooses to live life as a woman). Volunteers at the event donning nametags listed their preferred gender pronouns under their names. 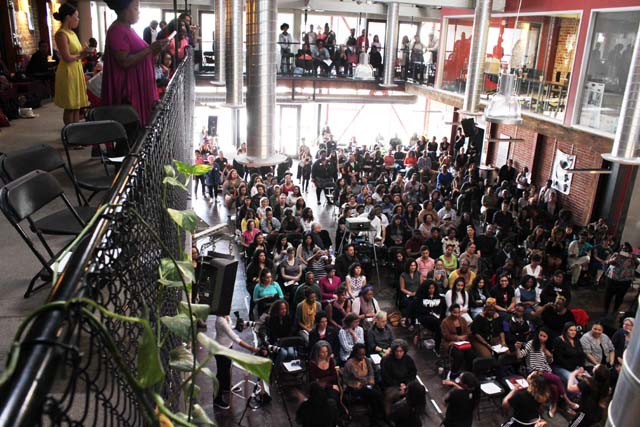 Organizers were well prepared. At least a dozen counselors were on hand to help with breakthroughs and to help participants with emotional issues. There were “quiet” rooms for mothers with babies. The complimentary lunch was excellent, provided by the Town Kitchen, a community driven business that connects low-income Oakland youth aged 16-24 with local chefs and artisans to plan, prepare, build, box and deliver lunch to companies and individuals in the Oakland and San Francisco Bay.

Criminal Justice System All About Punishment Not Rehabilitation 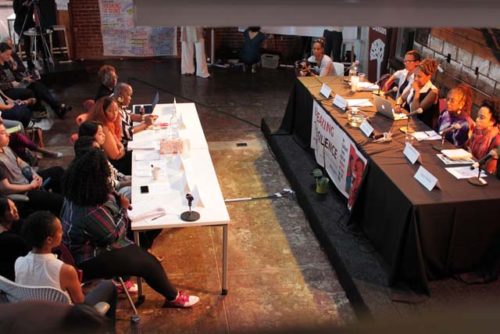 For each panel discussion, a handful of commissioners were selected from various institutions and nonprofits. Anywhere from two to five testifiers were also selected— women and girls with direct, personal experience facing challenges in Oakland with the topic at hand.

There was, as one might expect, some room for overlap among these issues. During the interpersonal violence panel, for instance, one woman shared her experiences dating a mentally ill trans man who locked himself in her home for several days after she broke up with him.

When friends suggested that perhaps it was time to call the police, Sonya refused because she recognizes that our criminal justice system is “not about rehabilitation or intervention…it’s about punishment.” She lamented the police’s inability to engage in trauma-informed care and severe lack of training when it comes to dealing with crimes committed by the mentally ill. Adding to this anxiety was a warning issued directly by her ex that should the police be called, he would utilize them to commit suicide by provoking them to shoot him.

As someone who was involved romantically for several years with a depressive and drug-addicted person, this story spoke to me on a deeply personal level. I know firsthand what it’s like to have to entertain the notion of calling the police on someone you love…And the consequences of choosing not to do so. Over a year would pass from when I discovered the drug problem and was first directly victimized as a result of it before I found the strength to leave for good.

Another testifier spoke of the many crimes her father committed against her and various members of her family, including physical assault, rape, and psychological torture which manifested itself in the form of citing Bible verses to her while committing acts of extreme abuse against her. Admirably, she did not appear to be outraged at her father, and lamented the fact that while he is serving a twenty-plus-year sentence for his crimes, “he is receiving absolutely no rehabilitation whatsoever.”

The Case of Natasha McKenna 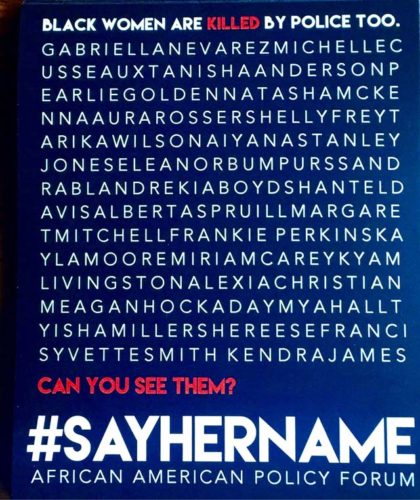 The inability of police to properly address interpersonal violence not merely as a one-criminal-one-victim scenario but as the result of various traumas and, in some cases, preexisting mental health conditions, was further evidenced by the breathtaking performance of Cat Brooks. Many of us social justice activists here in Oakland know of Cat Brooks as the dynamic, unstoppable force of nature behind Oakland’s Anti-Police Terror Project, but she also has a strong background in acting. Her one-woman show about Natasha McKenna, a schizophrenic African-American woman who was repeatedly tasered and ultimately died in police custody just over a year ago— on February 8, 2015— is incredibly heartbreaking and powerful.

With respect to the conversation on education, I was most moved by the story of Iman Sylvain, a student at the UC- Berkeley pursuing a major in microbiology. She disparaged the patriarchy inherent in the sciences, and told us about how her colleagues, upon hearing that she was interested in microbiology specifically as it relates to the environment and exemplifies the interconnectedness between all life forms, claimed that her focus was too “touchy-feely,” too “niche.” She habitually experienced micro-aggression and tokenization in her department, by both colleagues and faculty.

After months of watching women and people of color come in to apply for various positions, and yet seeing only white men hired to these positions, Iman finally found the courage to speak up about racist hiring practices at UC Berkeley.

As with many of us who choose to stand up for justice, her complaint was labeled “foolish” and “misguided.” She was told that, “Women of color just don’t want these jobs,” and “They’re just not a good fit.” When she finally asked someone what a “good fit” meant, the reply was: “Someone you want to have a beer with after work.”

After a school administrator went on a campaign throughout various states seeking to end affirmative action, Iman told us, the Black student population at UC Berkeley plummeted from 9% to just 3%. She has also seen nooses hanging in school libraries and witnessed the effrontery of on-campus “black face” parties. As a Black student in Berkeley, she said, “You are regularly tormented, and you are alone.”

During the panel on gentrification and displacement, testifier Shalini Eddens, Director of Programs at Urban Action Fund, referred to gentrification as “contemporary colonization.”

One feature of this crisis highlighted by several speakers is that affordable housing is not the silver bullet as which it is presented. Our goal should not be to relocate people from homes they can afford into other homes they can afford, but rather to keep people where they are. Said Alma Blackwell of Causa Justa, “We need to create local and regional anti-displacement policies that protect tenants and existing residents from being pushed out. We need to hold our elected officials accountable to creating policy that reflect the needs of the people.”

Displacement robs people of their communities and safety nets. Single mothers, for instance, tend to rely heavily on their communities for assistance with childcare while they are working. With money for babysitters or nannies out of reach, they are dependent on each other.

At the end, the names of women killed by state violence were said out loud by everyone in the room #SayHerName. It was an unforgettable day of healing and remembering. 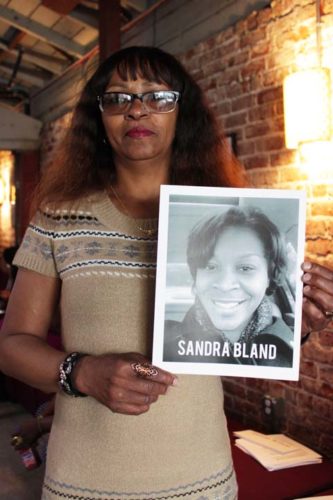 The Impact Hub lives up to its promise to be “where change goes to work” by consistently hosting powerful events such as this one. The African-American Policy Forum did an incredible job developing the Breaking the Silence Town Hall initiative. The #SayHerName campaign ensures that women of color who die at the hands of law enforcement are remembered and honored, and we as a community will be inspired to continue to fight for justice.

The problems with which we are being confronted on all sides will not go away on their own, and none of us can solve them by ourselves. It is by engaging in dialogue with one another and creating safe spaces in which to share our stories that we can build resistance to forces such as racism and gentrification. We are all in this together.