﻿Solidarity Statement and call to action! 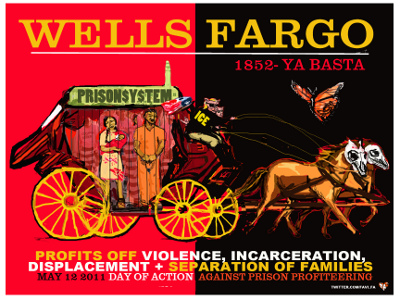 Today we stand in solidarity with community and labor groups that are taking to the streets to protest the private prison industry’s business model of pushing for harsher immigrant incarceration policies. Such policies drive up prison populations and put added strains on state and federal budgets.

On May 3rd, CJJC along with ACCE, SEIU, PICO and many more ally organizations took to the streets for the big Wells Fargo Shareholder meeting protest. We had a delegation of people inside and hundreds outside demanding that Wells Fargo puts a moratorium on foreclosures, divests from the prison industry and stops the criminal lending practices targeting communities of color as well as pay its fair share of local, state and federal taxes.

Today in LA groups are demanding that Wells Fargo divest its holdings in the GEO Group, a private prison company that runs immigrant detention centers and the Guantanamo Bay Detention Camp for the U.S. government.

Detentions of immigrants are set to cost taxpayers over $10 billion a year while profiting Manhattan-based hedge fund managers and other finance industry magnates like Wells Fargo who have significant investments in the private prison industry. Wells Fargo’s prison stock is valued at $88 million.

The private prison industry, in league with major investors, is working to increase the criminalization of our communities to further overpopulate our prisons. This industry has a long and shameful record of targeting and incarcerating African American communities, and is now seeking further profit through lobbying efforts to accelerate the detention of immigrants through laws such as SB 1070 in Arizona and its copycat bill in Georgia.

“Now they’re conspiring to get states to put more people in jail for longer periods of time, costing tax-payers millions for no justifiable reason which undermines the credibility of our justice system. We can’t let this happen,” said Peter Cervantes-Gautschi of Enlace, an alliance of low-wage labor groups in the U.S. and Mexico.

This group, in partnership with community groups and unions across the US, is calling on all public and private institutions to divest their holdings in Corrections Corporation of America (CCA) and GEO Group, America’s largest private prison corporations who profited a combined $3 billion.

The major investors in the private prison industry include Pershing Square Capital Management, Wellington Management Company, Wells Fargo Bank, General Electric and others. The protests coincide with the annual shareholders meeting of CCA in Nashville, TN where one of the protests will be taking place that day.

This is the first action and the beginning of the National Prison Industry Divestment Campaign. We are calling on all people of conscience to divest from Wells Fargo and demand that they stop profiteering off the suffering of our communities. Join us today and in all future actions that will be occurring all over the country.

Look for information for another action coming up on July 3rd.