Monster In the Mission Part 2 — It’s Not Over! 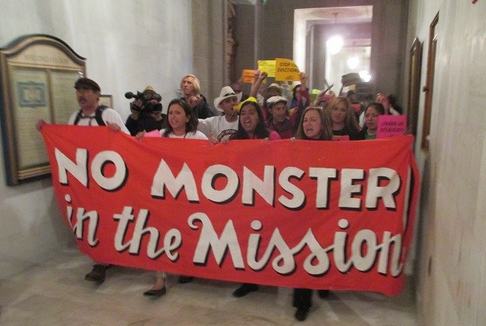 Our fight against Maximus/Robert Rosania’s luxury Monster in the Mission is not over! We have learned the project may be coming for a vote before the Planning Commission in the near future. Meanwhile Robert Rosania has hired astroturf consultants and canvassers who are intimidating and lying to folks in our community about whom they represent and how the Monster would impact our community.

It’s once again time to raise our voice and let Rosania and our City leaders know that we reject the Monster in the Mission. We need affordable housing and community serving businesses, not luxury towers that will further escalate the displacement of our community.

We demand that Rosania attend a community meeting in the Mission District to listen to the people whose lives he will be severely impacting.

Who is Robert Rosania?

Robert Rosania is the CEO of Maximus Real Estate Partners, a controversial real estate developer with a shady history on both coasts. Rosania was a lead partner in the purchase of Parkmerced in San Francisco and the subsequent plan to demolish 1,500 rent-controlled units there. At Parkmerced he fired the entire staff of SEIU USWW union janitors replacing them with non-union workers. In New York City, he personally netted millions in a notorious predatory equity scheme at Riverton Houses that ultimately defaulted and put at risk the housing of thousands of middle and working class residents.

In an attempt to overcome the massive community opposition to his Monster in the Mission, Rosania has contributed hundreds of thousands of dollars to local political campaigns to purchase influence in our City government. He is also notorious for his support of extreme right-wing causes and has made large contributions to politicians that oppose same sex marriage, immigration reform, and who support denial of climate change.

Rosania clearly cares nothing about our community and about San Francisco values. He cares only about his personal profits. He and his proposed project are bad for our neighborhood and bad for our city.

Build the MARVEL in the Mission, not the Monster

For more than three years, thousands of Mission residents have rallied, signed petitions, spoken at community meetings and delivered countless hours of testimony at City hearings demanding, “NO MONSTER IN THE MISSION.”

Rosania’s luxury towers would be utterly unaffordable for the existing community and further rising rents would mean the pricing out of existing families and businesses in the area. The people, merchants, and organizations that we cherish—our very community—will be displaced forever from the neighborhood.

The Plaza 16 Coalition spent months facilitating a collaborative community planning process to come up with a positive alternative development we call the MARVEL in the Mission. The Marvel’s housing would be 100% truly affordable and the project would serve other needs of the existing community.