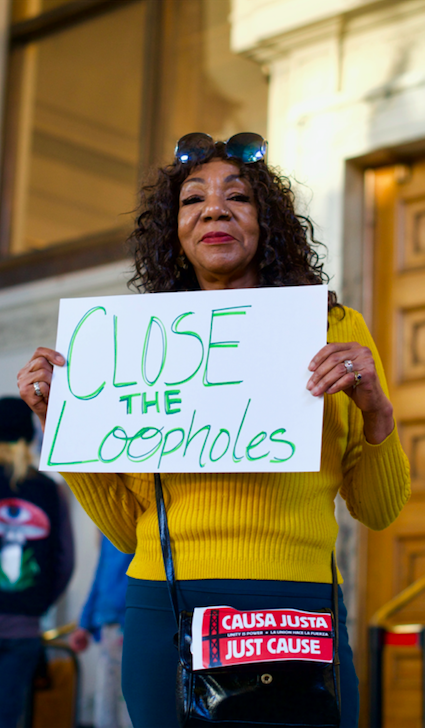 OAKLAND — Tenants and advocates are celebrating a huge victory. At the second reading, Oakland City Council voted 6-0 (1 excused; 1 recused), to amend the local rent stabilization ordinance to close a major “loophole” in renter protections. The legislation went into immediate effect Tuesday with the 6 passing votes and Oakland will now offer rent stabilization and protections against landlord harassment to more than 5,000 tenants living in owner-occupied duplexes and triplexes, who are often at risk of destabilizing rent increases that force residents to move out of Oakland, to unsafe housing, or homelessness.

An additional 27,000+ tenants are now protected from losing protections if their landlord attempts to move onto the property. This is the largest expansion of rent stabilization in Oakland since 1980 when the original ordinance was first passed.

At an impromptu victory rally outside council chamber,  James Vann, co-founder of Oakland Tenants Union, and a member of Close the Loopholes Coalition, stated: “For the first time since 1980 when Oakland adopted its Residential Rent Arbitration Program (RRAP), all covered rentals in the city will be subject to a uniform set of laws, regulations, eviction proceedings, no-fault relocation payments, and annual rates of permissible rent increases.”

Due to the devastating state law, Costa-Hawkins, Oakland, like all other cities in California, does not have “rent control” — but a similar set of policies aimed at limiting rents to ensure tenants have affordable homes called “rent stabilization.”   For many years, Oakland could not extend eviction and rent protections for tenants living in duplex and triplex rental units. Last night changed that.

For tenants and tenant justice advocates, who turned out en masse at Tuesday’s meeting, this victory culminated a long series of struggles that have gradually expanded since 2002 when a successful ballot measure won “Just cause eviction rights.” In the ballot of November 2016, the Measure JJ victory blocked many illegal rent increases by requiring landlords to petition for rent increases above the ‘by-right’ inflation rate.  This was followed by the Measure Y ballot victory in November 2018 that removed the prior exemption from “just cause for eviction” protections for owner-occupied 2 & 3-unit rentals. 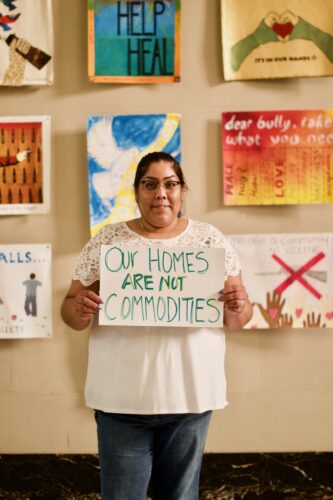 Said Carroll Fife, Director Alliance of Californians for Community Empowerment (ACCE), “Tenant organizing is growing stronger in Oakland. The Close the Loopholes Coalition was united in its efforts to pass Measure Y in 2018 and continued that organizing for the Tuesday win. We have become a model for what neighboring cities can and should do. This unanimous vote means so much for ACCE and members like Terema, Robin, Josephine and the three generations of her family, all long-term African American residents of Oakland who were displaced by a previous loophole in the duplex/triplex law, but who also paved the way for this victory – This win is for them.”

“The 2018 victory had the unfortunate effect of incentivizing investors and unscrupulous landlords to double and triple the rent of existing low rent paying tenants to be replaced by gentrifiers who could afford much higher rent, thus fueling Oakland’s excessive eviction and displacement crisis,” said Leah Simon-Weisberg, Directing Attorney of Centro Legal de la Raza,  and member of Close the Loopholes coalition.

After several years of organizing, lobbying, and testifying at committees and hearings, tenant justice activists, with the assistance of Councilmembers Dan Kalb (D-1 and Noel  Gallo, (D-5) were finally able to convince council members to remove the owner-occupant exemption on uncontrolled rent increases thereby closing the final loophole.

Speaking at the victory rally following the vote, Camilo Sol Zamora, Co-director of Housing, Land & Development at Causa Justa::Just Cause, energized the crowd stating:  “This is a tremendous victory.  What we accomplished tonight will permit many tenants, for the first time, to feel secure knowing the morning won’t bring with it a huge rent increase, against which the tenant was formerly helpless. Tonight,” continued Camilo, “many tenants will have a restful and peaceful night of sleep.” 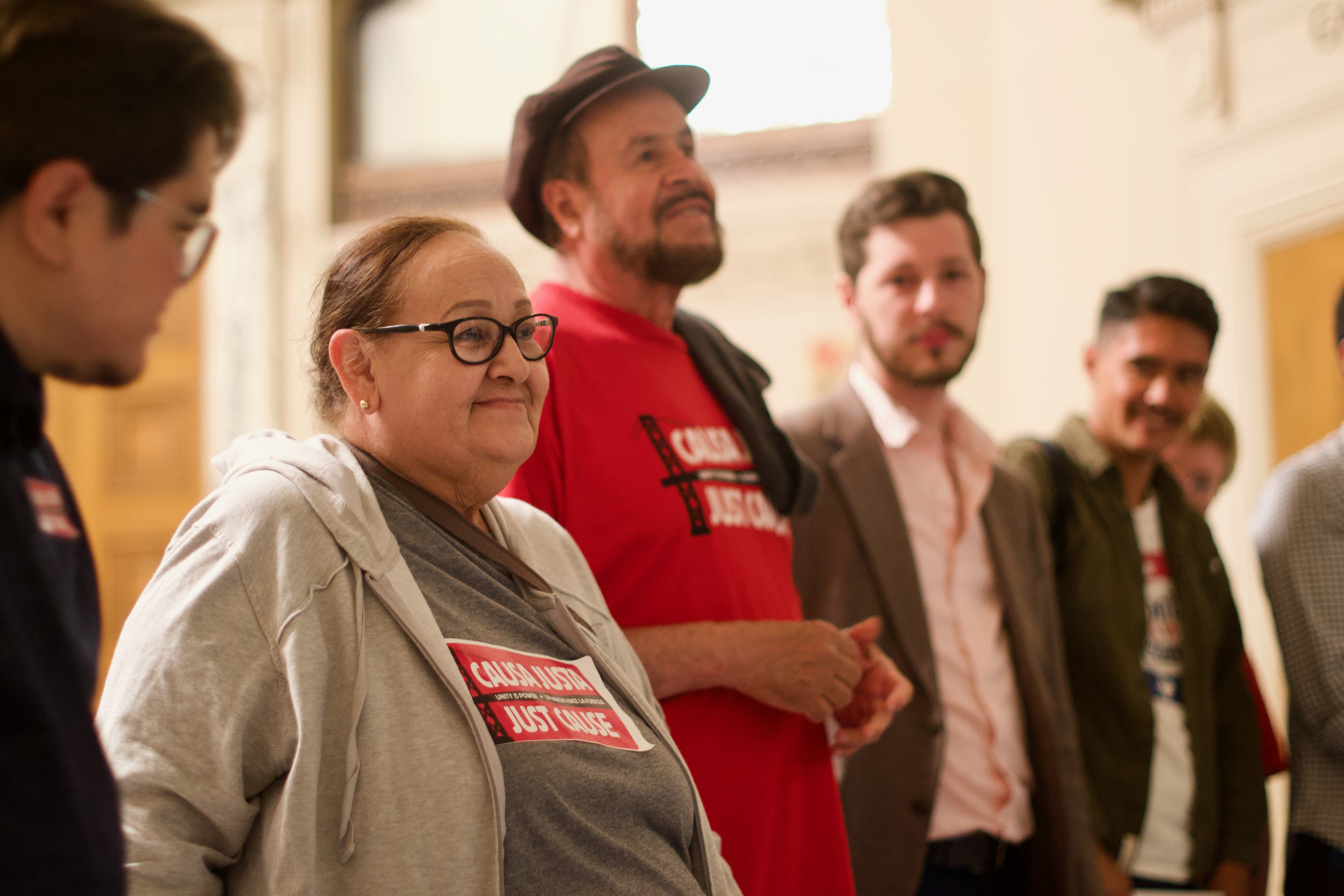 Arcelia Perez, who was facing a nearly $1,000 rent increase because of this loophole. Photo by Irvin Violette-Mehu