On May 24th CJJC members along with allies from Filipinos Advocates for Justice, Street Level Health Clinic, and our growing coalition in Alameda County were successful in getting the County Board of Supervisors to pass a resolution in support of the Trust Act. 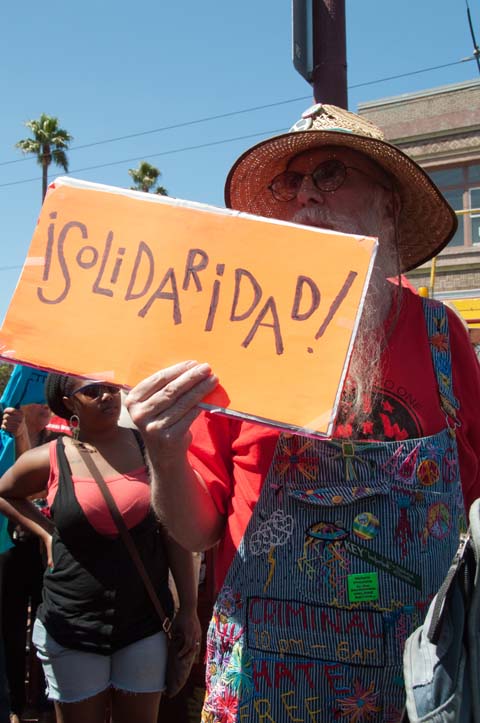 The Trust Act would allow counties in California to opt out of participation in the dangerous federal program program called S-Comm. S-Comm mandates collaboration between local law enforcement and Immigration and Customs Enforcement and requires police and sheriff’s department to share the finger prints of anyone who is arrested locally with ICE, regardless of whether that person has been charged or convicted of a crime.

As a result of this program 101, 741 people who have not been found guilty of any crimes have been deported nationally, 38, 828 people deported in California and 625 people deported from Alameda County.

CJJC member Billy Trice Jr. provided powerful and moving testimony before the Board when he said, “Everybody thought slavery and later segregation were okay. Today we all know they weren’t and are still not okay. We need to treat our immigrants who are indigenous to this land, with dignity and respect, we need to stop S-comm.”. As a result of the strong organizing efforts the Board voted 4-1in support of the resolution.

“Everybody thought slavery and later segregation were okay. Today we all know they weren’t and are still not okay.” — Billy Trice Jr.

Passing local resolutions against S-Comm and in support of the Trust Act is part of the overall strategy to build state-wide support to see the state level legislation pass in the next couple of months. CJJC has already been part of local efforts that has passed similar resolutions in San Francisco and Oakland as well.

The next step in our campaign will be speak out at the Public Safety Committee of the State Assembly on Tuesday, June 14th and we need you to join us. Come speak out, help drive others and stand up for racial, civil and human rights.