Data on the Housing Crisis in SF:
—From the Anti-Eviction Mapping Project

•    This map shows the density of the 1175 active restaurant and cafés that registered with the city from 2011-2013.
•    Rents in walkable distance to a tech shuttle stop are increasing more rapidly  (20% higher) than areas not within walkable distance of the shuttles stops.

• This heat map explores the relationship between private shuttle stop locations and indicators of neighborhood affluence. 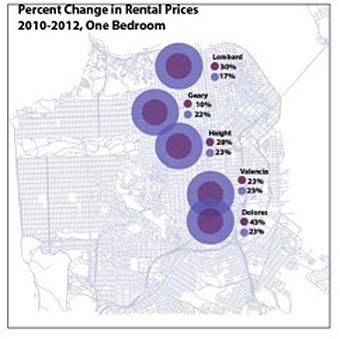 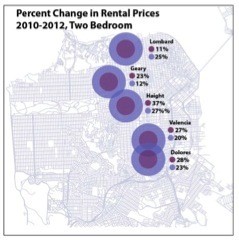 •    Jesus Sanchez, CJJC member and tenant on 24th St between Mission and Valencia (less than a block from the 24th St. x Mission shuttle stop) recently came home to find that the locks of his unit had been changed and he was being denied access to his home (until after an emergency action was organized). The landlord was clear about his motives stating that he was renovating the unit to be able to re-rent them for almost double the amount Jesus is currently paying.