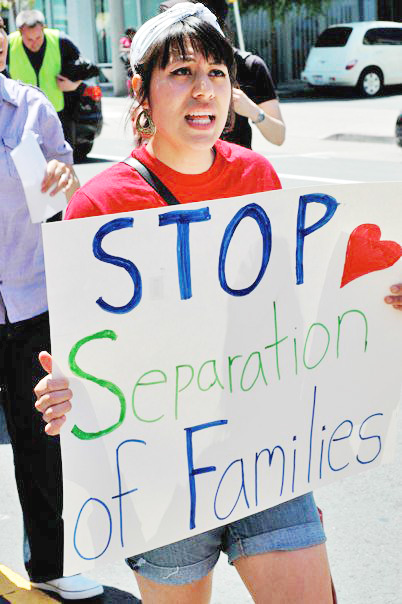 In a vote of 8-3 San Francisco supervisors passed a non-binding resolution to limit the use of local funds to honor ICE detainers.

The resolution was strongly backed by scores of immigrant rights advocates and organizations doing policy work around immigration including Causa Justa:: Just Cause.

“This is a clear step in the right direction and we hope that it sends the message loud and clear: We do not want S-Comm, and we do not want local police collaborating with ICE. We want our communities and families to stay together,” said CJJC Immigrant Rights Organizer Cinthya Muñoz Ramos.

Immigration and Customs Enforcement hold requests to local authorities are not mandatory. They are triggered by S-Comm so that ICE officers have the luxury of more time to pick up and deport immigrants.

The resolution provides political backing for the Sheriff’s Department and the Juvenile Probation Department to ignore requests from ICE to hold people in custody unless there is prior written agreement with the federal government that the costs of complying with the ICE detainer will be reimbursed.

Mirkarimi will succeed Sheriff Michael Hennessey who in June challenged jail policy so that the city would not respond to ICE detainers in certain cases. He is set to retire next month after 32 years on the job.

Meanwhile this Thursday, Dec. 15 in SF, community, labor, and faith leaders are sending a message to ICE and to Wells Fargo to stop targeting our communities. The protest begins at noon on the corner of Davis & Market Sts.

Across the country, the Immigration Customs and Enforcement (I.C.E.) Agency is doing the dirty work of the 1%—targeting hardworking immigrant families who have struggled to turn poverty jobs into good jobs and spreading fear into our communities.

On December 15, we’re letting I.C.E. know we will not be ruled by the fear they spread on behalf of corporations who profit from a broken immigration system.