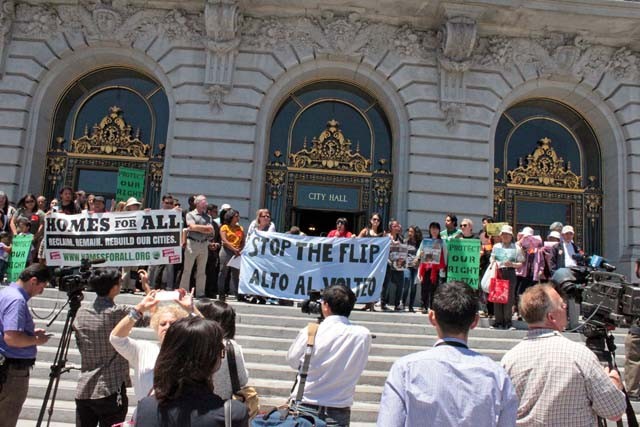 The SF Anti-Displacement Coalition of which Causa Justa :: Just Cause is a member in a “Stop the Flip” action on the steps of SF City Hall, announced that the measure would impose a tax on investors who sell an apartment building within five years of buying it.

The anti-speculation tax ballot measure, which includes exemptions for single-family homes, condos, or owner-occupied tenants-in-common, would reduce incentives for speculators to target and flip the shrinking supply of rent-controlled apartments and address the growing affordability crisis being fueled by this type of speculation.

The “Anti-Speculation Tax” grew out of the neighborhood tenant convention process in 2013, and where more than 800 tenants voted to place it on the ballot at the City-Wide Tenant Convention this past February.

The idea of imposing an anti-speculation tax was first backed by former Supervisor Harvey Milk in the 1970s. It was one of the final pieces of legislation he was working on prior to his assassination, according to The San Francisco Anti Displacement Coalition.

Says Ana Gutierrez, long-term Mssion district resident, and Causa Justa :: Just Cause lead member. “We need to keep fighting because this housing crisis has reached a fever pitch. Especially for elders, and for people whose income now doesn’t even cover rent. We need to keep fighting for our city for the city that we have built by living here for years, by paying taxes here. We won’t stand for people coming into our neighborhoods snatching our homes from under us to enrich themselves.”

Adds Maria Zamudio, SF Housing Rights Campaign Organizer for Causa Justa :: Just Cause, and Anti Displacement Coalition member. “Renters from every neighborhood are living in fear. It is clear that tenants from throughout the City are ready to join forces with their neighbors and fight together and demand change from City Hall.”

In addition, a national policy report by Right to the City:  Rise of the Renter Nation: Solutions to the Housing Affordability Crisis was unveiled. Gentrification and affordability of housing remain at crisis levels in the U.S.. Rents are soaring and it is a struggle to pay for basic expenses like food, healthcare, and childcare. Through our actions across the country, the Homes for All  (a campaign of Right to the City Alliance) is demanding – immediate funding to the National Housing Trust Fund by the Federal Housing and Finance Agency at the federal level and the passage of Renter’s Bill of Rights legislation in cities, that are in compliance with solutions outlined in the report.  EXECUTIVE SUMMARY HERE

In the report, scores of grassroots organizations detail a 5-pillar approach to policy solutions to the ongoing housing crisis in the U.S. which include: Ensure affordability, Improve Quality and Health Standards, Full Accessibility, Stability and Permanence and Community Control.
Key Highlights of Report:

•    RACE
The vast majority of the net increase in renters over the next decade will be people of color, with Latinos alone accounting for more than half of the total.

•    LGBTQ
Housing accessibility is a major concern for LGBTQ populations. LGBTQ youth are more likely to be homeless than the general youth population and, once homeless, are at higher risk for victimization and mental health problems.

•    CHILDREN
In 2009 74.5 percent of renters with children were paying more than 30 percent of their income in rent, compared with 54.4 percent of all rental households.