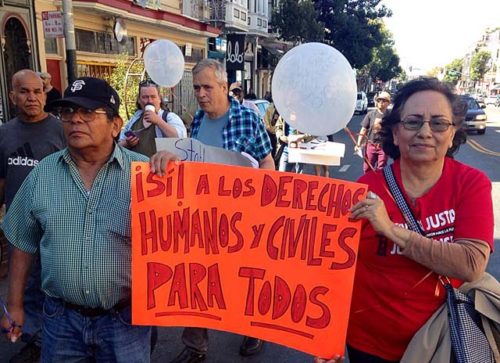 In late May, an incident at San Francisco City Hall showcased both the worst – and the best – of the immigration debate.

That day, scores of undocumented community leaders were supporting “Due Process“ legislation to keep law enforcement out of painful deportations. With the “Trump effect” on the rise, community groups are urging the city to stand strong against the scapegoating and demonizing of immigrants.

And, speaking of nativism, during the hearing, an agent of the far right-wing website Breitbart, Lee Stranaham, turned his camera away from the Board and started to aggressively film and intimidate immigrant community members who were present in the audience. He m has a long history of provocation and intimidation under his belt.

And Tuesday, he zeroed in on Chuy, a beloved local resident born with Down’s Syndrome who is also a 3-time survivor of leukemia. Despite his later denials, Chuy’s grandmother, Gloria, made clear: “He was staring at my grandson with a hatred I had never seen before.”

A community member sat next to the man – in the camera’s path – in an effort to prevent this harassment, but it continued.

Alarmed by the filming, with the camera pointed at his face, Chuy began to sob loudly.

The Sheriff’s deputies present did not initially respond to the disturbance, and Chuy’s aunt and mother came over to comfort him. Eventually, the public urged the man’s removal. But even as the deputies escorted him out, he continued to film, pointing the camera out towards the Chuy. (He’s since been distorting the incident all over the internet.)

But after this hate, we saw an outpouring of love.

As Supervisor John Avalos, the ordinance’s author, finished his remarks, he called out the hate: “We have to stand up and be courageous in this time when the fear of immigrants is so strong, and it’s being trumped up in our presidential election.”

“I hope our Sheriff was watching what transpired in the chamber, because I think that it illustrates why this is so critical, … This young man has survived leukemia twice. Three times. Three And the fact that he and Donaji, his mom, are here tells you how important this issue is, and that a sick man would come to this chamber to intimidate this young man illustrates why we as San Franciscans need to speak with one voice.”

Moving forward, we hope all of San Francisco’s leaders – the Sheriff, the Supervisors, and the Mayor – will embrace compassion over hate.