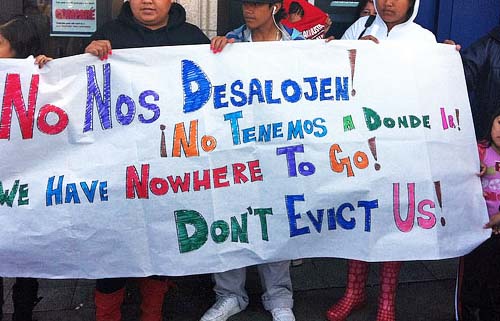 It seems public outcry and bad press shamed US Bank and Wells Fargo into dropping attempts to evict three families in the Excelsior. They took the eviction action off the court calendar, giving some breathing room to three Latina moms and their children living in the Excelsior district.

It took two housing rights organizations with over 25 years of experience shared between them: CJJC and the Housing Rights Committee, several weeks to unravel a tangle of bureaucracy and find out exactly WHO and WHAT bank was actually responsible since they both kept pointing the finger at each other!

After tons of calls to many different people at both banks, we finally found out that US Bank hired Wells Fargo to service the property.

The servicer, Wells Fargo just confirmed this week in a meeting with Causa Justa :: Just Cause and the Housing Rights Committee that they will
•    Not evict the families;
•    Pay all utilities;
•    And make repairs to the units.

We told you about these families last month when we gathered in front of US Bank on 16th & Mission Streets for a press conference to stop their eviction. You can read media stories about it here… here and here

So all in all, we are thrilled with the outcome of this case, but also painfully aware that it took mass mobilization, community collaboration, and pressure to find out even the simplest information, such as who now oversees the property.

This case exemplifies the struggles that many tenants living in foreclosed properties face daily not only here in the Bay Area, but across the state and nationally.These families are the face of the hidden victims of the foreclosure crisis and their struggle shows that when banks take over possession of foreclosed properties they very often violate tenant’s rights.

Now more than ever we need to hold banks such as US Bank and Wells Fargo accountable to local, state, and federal protections for tenants to avoid further displacement.

These families suffered through fighting an unjust eviction proceeding, facing the anxiety of possible utility shut –off, all the while not knowing who to turn to in order to maintain the property in habitable condition. If the bank admits that they are the present owner and by their documents have the power to evict or demand rent payment, then they and only they can be responsible for maintaining the property. 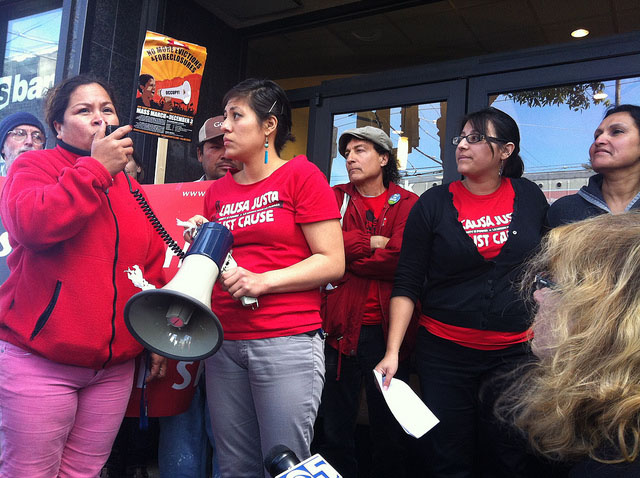 These mothers and their children who were brave enough to share their story so that it would be known widely and who were not afraid to confront not one but two banks are a true inspiration! Now as members of CJJC they will continue to share their story and hope to help other tenants who live in foreclosed properties and face similar abuses.