Wells Fargo: Foreclosed by the 99%! 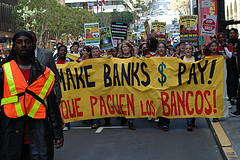 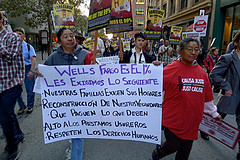 Chants of “We are the 99%!” echoed through San Francisco’s Financial District on Wednesday, as Wells Fargo Bank found itself unable to operate for 5 hours, surrounded on all sides by protesters, it’s windows covered with huge “Foreclosure” notices.

Our demands of Wells Fargo were clear: a moratorium on foreclosures, respect for the rights of tenants in foreclosed properties, divestment from private prisons that turn a profit from immigrant detention, and that Wells Fargo pay their fair share in taxes.

Having advocated for these many times with Joseph Ohayon, Wells Fargo VP of Public Relations, we took the opportunity to put his phone number up on poster board, and ask hundreds of protestors call him, which quickly filled his voicemail with support for our demands.  We look forward to our next interaction with him and will let you know how it goes!

We were honored to work with allies in labor, community, and with Occupy SF activists, to make this an inspiring and movement-building convergence, covered by more than 60 media outlets, bringing diverse communities to the fore, and putting the Bay Area on the map of resistance to the 1% that are hoarding the wealth and decision-making power that belongs to all of us.  This was an international day of action, happening throughout Latin America, marking indigenous people’s day, and echoing the call of the “indigndados” (outraged) for economic justice on our continent.

As a community-based organization of working class Black and Latino families defending their homes and their rights, we have had a bone to pick with the 1% for a long time.  In July, the Pew Research Center reported that since 2005 median wealth fell by 66% among Latino households, and by 53% among Black households, compared with just 16% among white households.  Most of this wealth was lost in the housing market, controlled by corporate giants like Wells Fargo, when families defaulted on predatory loans, or lost their entry-level jobs and as a result lost their homes.

Of course, then, we find common cause with the encampments springing up across the country, criticizing the unequal distribution of wealth.  From Walls Street to Market Street, from union halls to CJJC’s membership meetings, there’s a promising new energy in our movement, and a new shared identity, as the 99%!  We are hopeful that this is just the beginning of what we can do together.

Sat 10/15 is another international day of action, where there will be an exiting “Jobs not Cuts!” rally and march connecting with Occupy Oakland: //jobs-not-cuts.org/

Check out some of the sympathetic coverage of 10/12, below!

KGO – Excellent representation of UNITE HERE Local 2850, a lead organization on this event:

Please DONATE to CJJC to help us build up this work.