Were you at Wells Fargo Tuesday? 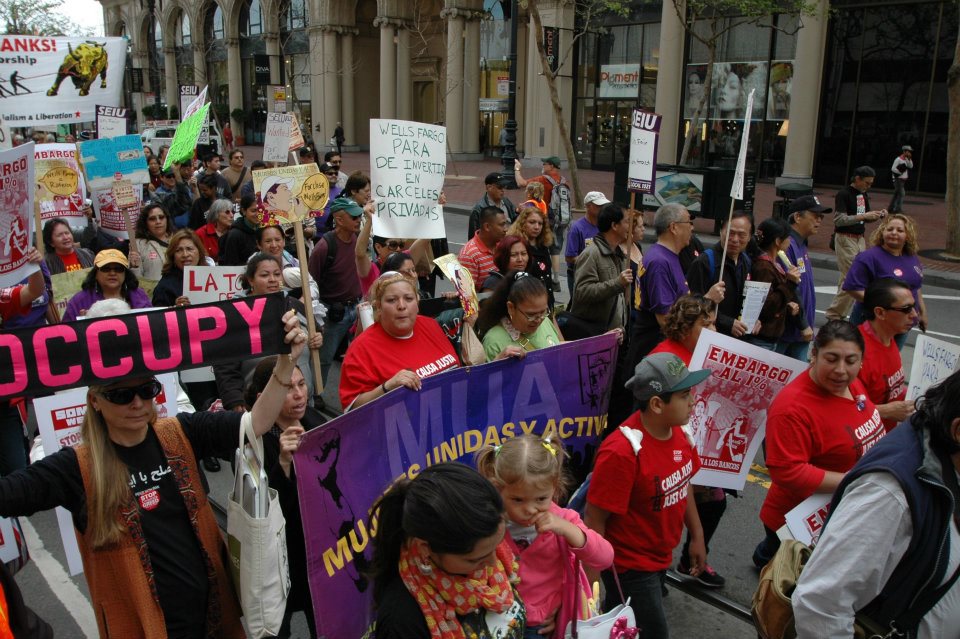 What a Powerful Action!

More than 1,500 people crowded the streets surrounding the meeting, 40 people sat in in the lobby and blockaded entrances to the building and another 30 made it in to the shareholders’ meeting itself.

In an unprecedented move, Wells Fargo locked hundreds of people out of the meeting, filling the seats with their employees and key allies, and refusing access to many upset community members who had shares and proxies giving them the right to attend.

Despite CEO John Stumpf and others’ attempts to avoid facing the 99%, they heard from us loud and clear. Dozens interrupted and spoke out in the meeting and were ejected and arrested by SFPD. Outside, the sound system boomed with speaker after speaker who had been impacted by Wells Fargo and those who are working to stop foreclosures, private prison and immigrant detention centers, to relieve student debt and to respect tenants’ and workers’ rights.

There is much more to be said about the success of this first of the major shareholder actions planned for the Spring. For now, check out these photos on our Facebook page and a few of the more than 500 media hits from local and national news outlets:

Wells Fargo is one of the bad actors, but all of the big banks need to take responsibility and be held accountable for the role they have played in causing and profiting from the economic crisis and the exploitation of communities of color. The next big shareholder action is at Bank of America in North Carolina on May 9th. Causa Justa is sending one of our members who is fighting BofA to this meeting to tell her story. Check out the preview here.

We are also having a local action against US Bank THIS Thursday. Check out the event here and if you can’t come, call US Bank in San Francisco, at (415) 575-2800 between 12pm and 1pm Thursday, to tell them to back off!