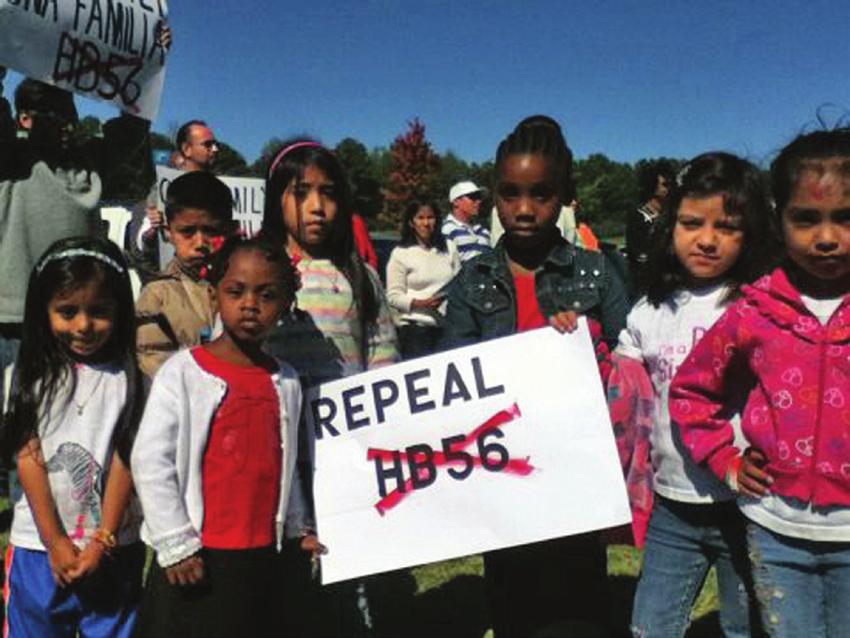 Throughout Alabama, people are coming together – across differences in race, nationality, immigration status, gender, and political party affiliation — to fight for the repeal of Alabama’s new law HB56, the most extreme anti-immigrant law in the country, a law that treats immigrants worse than animals and gives carte blanche to anyone with a bone to pick.

Crucial to the success of the movement to repeal HB56 has been the inspiring outpouring of support and solidarity from African American communities, and the unity that’s being actively built between Latino immigrants and African Americans on the statewide level. With memories of the civil rights struggle still very present, many veterans of the civil rights movement are stepping up in the struggle against HB56.

The NAACP is organizing African-American communities across the state and bridges are being built at every turn.

Hundreds of Black Baptist ministers signed onto a letter in protest of HB56. Freedom Riders have dialogued with young immigrant rights activists fighting for the DREAM Act. The Black Alliance for Just Immigration has held immigration workshops in Black communities throughout Alabama. Across the state, civil rights leaders are reaching out to newly organized immigrant communities, sharing a wealth of wisdom and lessons from the Black freedom struggle. In turn, Latino immigrant communities have turned out for the Martin Luther King Day Parade, and are making plans to march in the annual Bridge-Crossing Jubilee March, a celebration and commemoration of the right to vote and the historic March from Selma to Montgomery that took place in 1965.

Alabamians are getting organized and forming new organizations with coordinating support provided by the Alabama Coalition for Immigrant Justice (ACIJ).

ACIJ organizers have held hundreds of Know-Your-Rights trainings across the state to spread awareness about the law, and help immigrant communities defend themselves. The trainings are also used to identify emerging leaders in the community. Simultaneously, Immigration 101 workshops are being held in ally communities, educating folks not directly affected by the law, on the myths and facts around immigration, and building support for a repeal. Many of these workshops have taken place in churches across the state —hundreds of faith leaders are speaking out.

It is becoming more clear that HB56 is driven by racism and scape-goating, and that these driving forces are false solutions to our economic problems. Rather than fixing the economy, HB56 is devastating the lives of thousands, and hurting all Alabamians morally, spiritually and economically.

This law is the most aggressive and extensive statewide anti-immigrant bill in the country. The potential and impact of both our victories and losses in Alabama will be far reaching. Organizing resources in Alabama are very minimal and national solidarity and outcry against this law are imperative.

Will Alabama set the new standard for the level of racism, abuse and dehumanization that is acceptable and the new normal? Or will this be a moment the tide really turns and laws like this become politically impossible?