Defend the Public Sector and Democracy

From Wisconsin and North Carolina to Tunisia and Egypt! 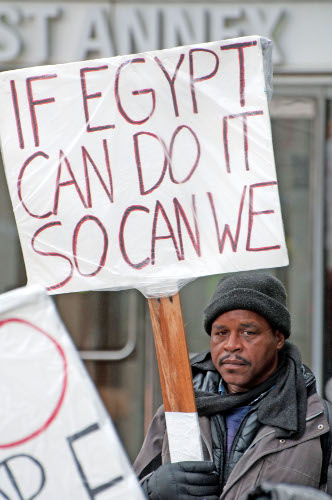 Grassroots Global Justice would like to support the record number of protestors coming out to defend collective bargaining rights and the public sector in Wisconsin. The fight in Wisconsin is the latest sign of the growing unrest developing throughout the world among the masses of working class and poor people and even the middle-classes, demanding government accountability to democracy, economic justice and human rights.

From the protests for economic justice in Wisconsin, North Carolina, Indiana and Ohio, to the political revolutions in Tunisia and Egypt, we stand with the masses of people rising up to defend their rights and demand change. We recognize that these struggles stem from a similar sense of frustration — anger with officials and government leaders more concerned with private interests than with the public good, and exasperated with how much harder it is getting for people to simply survive.

We believe these protests are just the beginning here and across the globe saying enough is enough — enough of governments that fail to represent the people, enough of the repression of basic rights like collective bargaining and the right to peaceful protest, and enough of growing inequality where the top 3% of the world’s rich are getting richer, while millions across the globe are being forced into poverty.

In Wisconsin, North Carolina, Indiana, Ohio and other states across the U.S., state budget cuts are reducing and eliminating vital services needed especially by working class and poor people and communities, which are disproportionately made up of Black and people of color, women, children, seniors, and the mentally and physically disabled.

In Tunisia and Egypt, people overthrew their autocratic rulers in the hopes that new government leadership will secure sovereignty, jobs, and human rights for all Tunisians and Egyptians. In Puerto Rico, students are leading a militant movement to demand that the government stop rising tuition costs that are depriving poor and working class students of higher education and that are a setup for the privatization of the islands’ oldest public university.

People want democracies that involve them not only in electing members of government, but that empower them to have input in shaping the direction of government policies, domestic and foreign, that impact the economy and all of the institutions that affect their lives. Inside of the U.S., the world’s wealthiest country, and one that claims to be the leading example of a “democracy”, government has failed to be accountable to the basic needs of the majority of its people.

In the U.S., budget cuts are being made at the same time that governments are providing tax breaks, incentives and loopholes for the major corporations and the rich, at the expense of the needs of the people. We are seeing this in Wisconsin, where Senate Bill 11 is not only threatening to cut benefits and collective bargaining rights for public sector workers, it would also allow for Wisconsin’s public utilities to be sold to the highest bidder.  Political analysts have shown that the highest bidder would no doubt be Koch Enterprises, who contributed more than $45,000 to Governor Walker’s campaign, and who stand to earn ridiculous profits from the integration of their existing energy extraction and production businesses with the state’s distribution infrastructure.

The public sector – public jobs, public institutions, public services and a government that works for its people – provides the basic safety-net for supporting all people with the basic human needs necessary to leading a dignified life. The public sector must be protected!

In Wisconsin thousands of workers and students sat in at the State Capitol for days on end, and over 70,000 workers protested attempts to enact Governor Walker’s so-called “Budget Repair Bill” that would wipe out the right of public sector workers to collective bargaining.

Unlike Wisconsin where these worker rights are under attack by the Governor and corporate powers; in North Carolina, Virginia, Texas and states throughout the South & South West, public sector workers don’t have the basic right to collective bargaining.

The right to organize, for workers to have input in shaping decisions about the working conditions, must be a basic right. Collective bargaining ensures that workers can negotiate for fair and living wages and safe and healthy workplaces. This right must be defended and fought for against the scapegoating from wealthy conservatives who want to erode workers rights to earn even larger profits. It’s another case of “main street” being blamed for “wall street’s” mistakes.

Demand Collective Bargaining Rights for All!

Demand Government that Meets the Needs of the People!

The People Should not Pay for the Crises!

Grassroots Global Justice (GGJ) is a national alliance of 52 member organizations coming together to build a popular movement for peace, democracy and a sustainable world. We support each other’s local struggles and collaborate with international allies who share our vision and commitment to building a transformative social justice movement beyond borders. Causa Justa::Just Cause is a proud member of GGJ. To find our more about GGJ check us out at – //www.ggjalliance.org