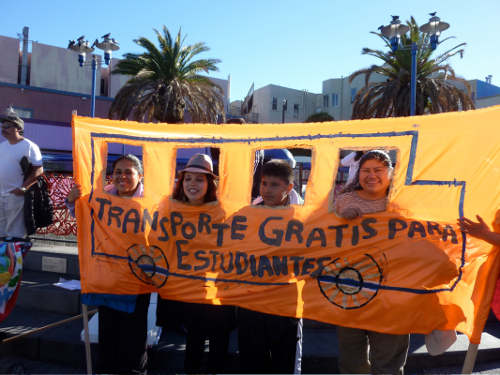 On a recent rainy afternoon in San Francisco’s Mission District, members from People Organized to Win Employment Rights (POWER) and the MORE Public TransitCoalition (MUNI Operators and Riders Expanding Public Transit) distributed applications to poor and low-income families for free MUNI passes for students in the San Francisco Unified School District (SFUSD). In March, the Metropolitan Transportation Agency (MTA) approved money for 12,000 free MUNI passes for our city’s families, especially those who are struggling to make ends meet. POWER and the MORE Public Transit Coalition worked with the San Francisco Youth Commission to create a Lifeline program for youth in the City, which would have provided discounted MUNI passes to young people whose family income qualifies them for free or reduced lunch.

One POWER member, Joanne Abernathy, lives in the City’s Bayview Hunters Point district. When MUNI raised the cost of youth monthly passes last year by 100% and decided to reduce the yellow school bus system by 50%, Joanne wasn’t sure how she would get her children back and forth to school and still be able to put food on the table. With a monthly income of approximately $900 that was supposed to cover rent, food, and other expenses, MUNI’s fare increases created a tough situation.

To help families like Joanne’s, POWER and the MORE Public Transit coalition began meeting with our district supervisors, MTA officials, and officials in the SFUSD to begin to figure out how to deal with rising costs and cut service that were breaking the backs of working families. We were successful in creating a Youth Lifeline program, and getting a commitment from the MTA to provide money to pay for discounted passes.

However, administrative hurdles kept the MTA and SFUSD from implementing the program for nearly eight months. So when POWER and MORE Public Transit discovered that the program hadn’t been implemented, we fought for MUNI and the SFUSD to provide the passes for free for the remainder of the school year. “We fought hard to get these free bus passes,” said Gloria Esteva of POWER. “Now we want to make sure that children get these passes in their hands and don’t have to worry having bus fare in order to make it school each day.”