Elderly Tenant Takes On Landlord And Wins $12,000 In Back Rent

A family friend referred Rufina Murga to Causa Justa :: Just Cause’s San Francisco office because her landlord was attempting to evict her illegally. The landlord managed to convince two of Mrs. Murga’s roommates into leaving by claiming that she intended to move into the unit to save on transportation costs. While an owner move-in is a just cause for eviction in San Francisco, it requires relocation payments for each tenant who has resided in the unit for more than a year and a 60-day notification period. Mrs. Murga did not receive a valid notice. 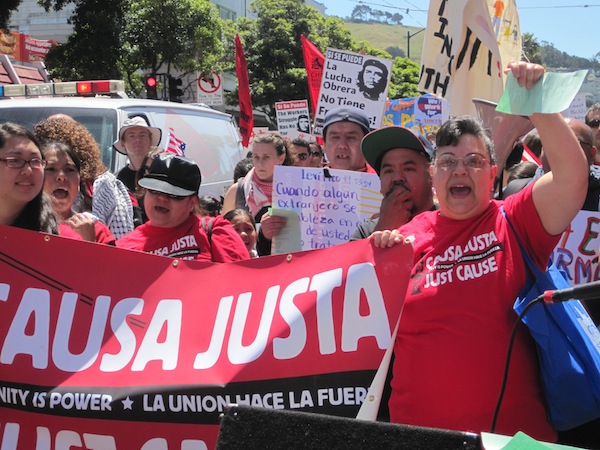 When Mrs. Murga decided to fight her landlord’s intimidation and stay in her unit, she came back to CJJC because she was also behind on the rent due to the fact that her roommates left. CJJC helped her file a petition to determine her actual rent. During her counseling session it appeared that the landlord had illegally raised the rent by charging her for utilities when her original agreement included utilities in the rent.

CJJC represented Mrs. Murga at her Rent Board hearing, and the results of our efforts were inspiring. Not only did the Rent Board Judge agree that Mrs. Murga did not have to pay for the utilities, but also that the landlord owed Mrs. Rufina $12,000 in overpayments. Mrs. Murga said, “I thought that I was going to have to move out. I didn’t know that I had all these rights. Each time I came to the office, I left feeling more confident that I would not become homeless and that I would be taken care of.”

Mrs. Murga who is elderly and barely makes enough to cover her rent, was surprised that the result of her decision to stay in her home also resulted in her receiving compensation. “Every time I came to the office, I felt welcomed and was given confidence. I didn’t want to take up anyone’s time and I am grateful for the help that was given to me.” Mrs. Murga decided to join CJJC as a member immediately, “I almost didn’t come to CJJC. I didn’t want to leave my home, but I thought I had to. I think there are people like me, without support or confidence who decide not to fight back. I joined because I realized CJJC does humble work to help us.”