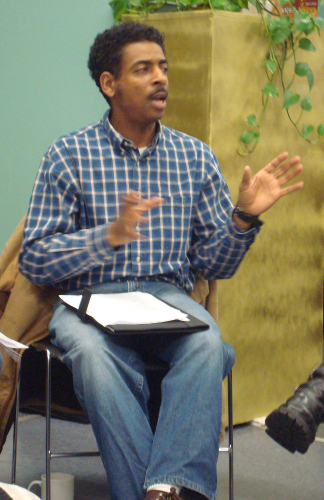 My name is Sheon Slaughter and I am a Causa Justa::Just Cause member. I have lived in North Oakland at 32nd Street and Telegraph Avenue for four years and while I love my neighborhood, there are some serious issues.Foreclosures have been on the rise and more and more people are having issues with their housing. Recently a family who was relatively new to the neighborhood started having problems with their landlord.

Shortly after the landlord turned off the tenants’ water knowing that three small children lived there. What really outraged me was that this did not just happen once, but several times. I just could not believe the situation. When I heard from them what was happening I brought them right over to the CJJC Tenant Rights Clinic had them speak to one of the counselors, Princess Beverly Williams.

She helped my neighbors find out that the property was at the end of a foreclosure process. She advised them about their rights and helped the family get their water turned back on.

It is clear to me that foreclosures are only going to increase in my neighborhood. Things are not getting better, they are getting worse. More than ever, neighbors need to talk with each other and really find out what is going on. We have to protect our neighborhood from people who just want to come in and make a profit by “flipping” property, buying it cheap and selling it for a lot more.

Our homes and neighborhoods are not for sale and it will take neighbors like us to make sure that housing remains a right for everyone.