The Problem With Evictions 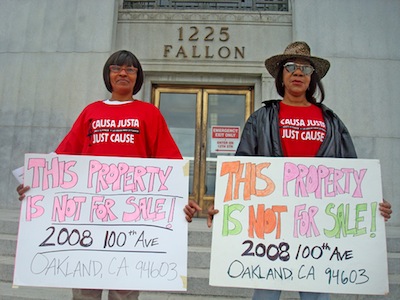 More than $3.5 million people in the United States are homeless and another 6 million people are on the verge of homelessness, paying more than half their income for rent and struggling to get by. The need for affordable housing is clear, from the tens of thousands of Atlanta residents that scrambled to get on a Section 8 waitlist last year to the 55,000 households that applied to be on Oakland’s Section 8 waitlist in January. San Francisco waitlists for public housing and Section 8 combined total more than 40,000 households in need of affordable housing.

At the same time, millions of homes in neighborhoods throughout the nation sit vacant due to the foreclosure crisis, which has worsened an already existing housing and economic crisis, especially in Black and Latino communities.

Working class families and low-income communities have been forced to bear the brunt of the economic crisis. Black and Latino communities are both are disproportionately impacted by the foreclosure crisis, and have unemployment rates at depression-era levels. Furthermore, the government has insisted on passing policies that eliminate resources for services people need, block real job creation, and hand over billions of taxpayer dollars to big banks and other corporations.

On a local level, we have seen a considerable increase in evictions over the past year. The Alameda County Sheriffs’ department did a video on the surge in evictions in 2007. Evictions in the county were up to more than 500 per month and the number continues to rise. At Causa Justa :: Just Cause, there’s been a steady increase in the number of people who come through our doors with unlawful detainers and pay or quit notices. Almost half of the people that we’ve seen in the past year have come in with an eviction notice.

More recent evictions are resulting from a loss in income, due to job loss and cuts in assistance. Often times, people are evicted and they didn’t know until a sheriff showed up at their door. Sometimes language barriers prevent a tenant from reading the unlawful detainer, other times landlords don’t follow the legal procedure for eviction, and most of the time banks deliberately ignore laws that protect tenants. The eviction process is the fastest civil court proceeding — a tenant can lose an unlawful detainer case in five days!

The current eviction law states that a tenant whose rent is overdue has 3 days to pay the rent, or they will be forced to leave their home. Three days is a very short amount of time to explore payment options, and often leads to eviction because families don’t have enough time to gather the resources needed to stay in their homes. This is extremely unfair, and at a time of crisis, immoral and unacceptable.

State Assemblyman Tom Ammiano (San Francisco) proposed a bill early this year, AB 265, to address this critical issue. When passed, AB 265 will extend the 3-day pay or quit period to 14 days. This policy takes into consideration the current economic climate and the disproportionate impact the crisis has on tenants.

Overall, being a tenant puts you in a precarious condition with little to no recourse for injustices that you face. Right now, if a tenant is illegally evicted, they cannot file a claim in court to collect for their damages. Due to the fact that so many illegal evictions have been taking place, there’s another statewide bill that will change this fact. This new bill, AB 934, will give tenants the right to sue after an illegal eviction. Most evictions carried out by banks that became landlords through foreclosing were illegal. AB 934 was authored by State Assemblyman Mike Feuer (Los Angeles) and is moving through committee as this paper goes to print.

Throughout the spring, CJJC members, supporters and allies will be directly lobbying for these bills statewide while fighting to extend tenant protections locally. We need you to join our fight. Together we will prevail.