Tunisia: Home to the Social Movements of the World!

January 14, 2011, is a historic day in Tunisia: When the people ousted the 23-year dictatorship of Zine El Abidine Ben Ali. That struggle united many parts of society –old school nationalists who fought for Tunisia’s independence from French colonialism; street vendors fed up with police harassment; garment workers who led strikes against their multi-national corporations bosses; youth who protested the more than 40% unemployment they faced, to families struggling to eat when austerity measures doubled the price of bread. 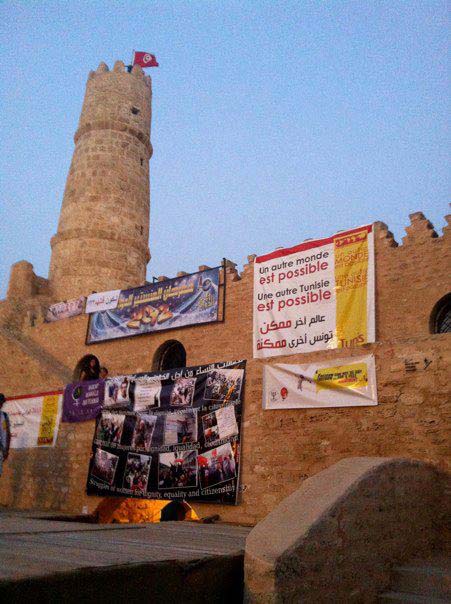 The Tunisian social movement is now strategizing about the transition: how to build more democracy, more rights? How to confront religious patriarchy, and ensure equal rights for women, as promised in their original constitution? How to respond to neoliberalism, and the constant pressure to become an economic colony of the global north?

This discussion led Tunisia movement organizations to step up as hosts of the 2013 World Social Forum, the largest civil society gathering of our time. As stated in their Charter Principles, it was an open meeting place for reflective thinking by groups and movements of civil society opposed to neoliberalism and to domination of the world by capital and any form of imperialism…committed to building a planetary society directed towards fruitful relationships among Humankind and between it and the Earth.

“WSF 2013 promises to be full of inspiring stories, and will help build connections between otherwise isolated local fights towards a truly internationalist movement of the 99%.”

The Social Forum was built as a people’s alternative to the World Economic Forum, a meeting of the world’s 1% in Davos, Switzerland, where they advance the doctrine of neoliberalism and “free trade” that causes cutbacks, crackdowns, and corporate power all over the world.

World Social Forum 2013 will convene in Tunisia’s capital, Tunis, March 23-28, 2013.  The local host committee is hard at work, meeting under banners that declare their vision: “Tunisia: Home to the World’s Social Movements!” The forum promises to connect uprisings in North Africa and the Middle East to each other, and to movements across the world.  It will also educate about people’s struggles on the African continent. The Grassroots Global Justice Alliance, of which Causa Justa :: Just Cause is a proud member, is supporting these efforts, and will send a delegation to attend the forum.

With limited, biased news, most of us hardly know where Tunisia is; let alone how much their struggles are connected to ours, or what role the US plays in supporting dictators in the region. We have much to gain from being part of this historic gathering.

One of the many stories of the Tunisian uprising is of a group of hundreds of families who were promised affordable housing, and when the government didn’t deliver they set up a tent camp in the Sahara Desert, which some nicknamed “Occupy the Sahara!”

WSF 2013 promises to be full of such inspiring stories, and will help build connections between otherwise isolated local fights towards a truly internationalist movement of the 99%.