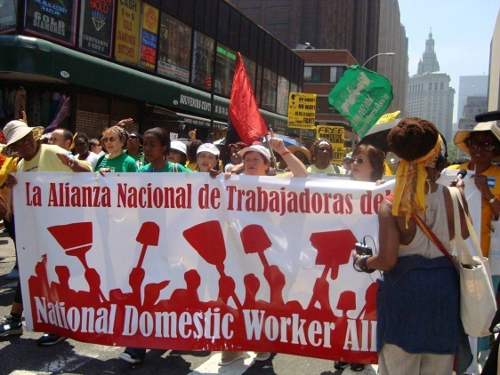 Domestic workers – who care for some of the most important elements of our lives like our families and our homes – are among the most vulnerable workers in the United States today. There are more than 200,000 domestic workers in California. Domestic workers serve as nannies, housekeepers, and caregivers for the elderly and disabled. They leave their homes early, often in the dark, to arrive at their work sites before their employers leave for work. Some even live in their employers’ homes, caring for these families day and night.

The more hours these women spend working in their employers’ homes, the fewer hours they have to give their own children the care they need and deserve. Many domestic workers have to leave their own children behind in their home nations. Even though the economy depends on their work, their labor has long been taken for granted. Historically associated with the unpaid work of women in the home and with the poorly paid labor of Black and immigrant women, domestic work today remains undervalued and invisible.

Because domestic work is one of our nation’s oldest professions and because it has a vital role in our economy, one might assume that domestic workers would be protected by labor laws. However, U.S. labor laws have explicitly excluded domestic workers. When the New Deal’s labor legislation was being debated in the 1930s, Southern members of Congress – who feared the emergence of an African American labor movement – blocked the inclusion of farm workers and domestic workers in federal labor laws.

Even if domestic workers were included in labor laws, the structure of the industry would make it difficult to organize workers or to enforce basic labor standards. With no clear standards or laws to ensure basic rights, workers have to negotiate the terms of their employment individually, day-by-day, in situations where they lack any real bargaining power. More often than not, workers risk losing their jobs by asking for basic rights and necessities like an afternoon off to see the doctor. Even for employers who want to compensate domestic workers fairly, there is little information available.

Victory in New York! The Struggle Continues in California

>Domestic workers are now gearing up to win a Domestic Worker Bill of Rights in California. Grassroots organizations across the state are working together with allied organizations to pass AB889 (Ammiano). This bill addresses the longstanding, unfair exclusion of domestic workers from labor protections, reflects the unique conditions and demands of the industry in which they work, and clarifies employers’ obligations.

“Through my work on [California’s] campaign, I have learned that the work that we do as women should be recognized,” says Luz Sampedro, a domestic worker in San Francisco, California. “I don’t feel like my work as a mother and wife or as a domestic worker in other people’s homes is valued. Sometimes I feel like I am seen as just another piece of furniture in the house. But this injustice motivates me to struggle so that our voices are heard, our work is recognized, and our rights are respected. The work has to begin with us as women. We have to respect ourselves and our work first and then demand that respect from everyone else.”

Set Aside May 24 for Immigrant Rights Day in Sacramento

Courageous women like Luz Sampedro are organizing so California will be the next state to correct the legacy of discrimination against domestic workers. They are working to build a strong base of support amongst labor unions, churches, and employers. If you are interested in joining the effort to secure rights for domestic work- ers please join us in Sacramento on May 24th for Immigrant Rights Day. We will be taking our message to the state capitol and asking that legislators enact our Bills of Rights for California. If you would like to support this effort please contact Andrea Mercado (415) 621-8140 extension 301 or email andreacristina@mujeresunidas.net