Victories From Our Tenant Rights Clinic 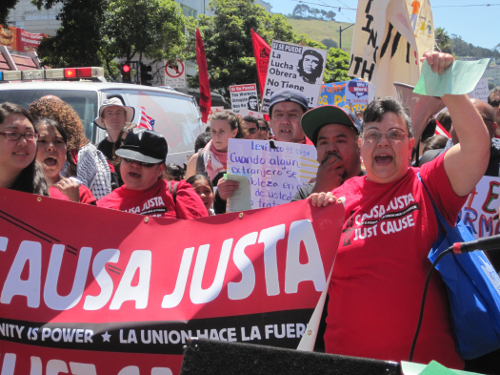 Gilberto and Elvia Nuñez were being harassed and accused by their landlord of being “illegal.” The landlord made harassing phone calls to them at all hours of the day including very early in the morning when the family was still asleep.

The landlord was rude, threatening and mean even when talking to their young children. The landlord threatened to call Immigration and Customs Enforcement (ICE) to have the children taken away and put into foster homes and have their parents put in jail.

Additionally, the landlord issued the Nuñez family a 3-day eviction notice, alleging that their Section 8 paperwork was not all in order and made unfair demands by asking the family to pay their rent before the first of the month. The family was confused by these actions because they has lived in the building for 15 years without incident, and had been tenants of the same landlord for 5 years before these problems arose.

Initially the family felt scared and alone. But after they went to the office of Oakland City Council member Ignacio De La Fuente, they were referred to Causa Justa :: Just Cause for help.

“At CJJC we were made to feel like we were at home. The people there really did want to help us and had real concern for our issues and for the well being of low-income families. The staff was interested in helping us resolve our problem. At the end of the first meeting we didn’t feel alone anymore. Our daughters felt the same way and it was a relief. We were living in frustration and felt like our landlord would throw us out at any moment. We have been living in the same place for 15 years and to think that we could be thrown out just like that was just not right. It’s good to know that there’s an organization like Causa Justa to help us with our issue,” said Mrs. Nuñez.

As a result of the efforts of the family and CJJC, they are still in their home. They are continuing to work on resolving all issues regarding their housing, side-by-side with the organization. They have also joined the organization as members.

“We plan on staying involved with the organization as we are all now members of Causa Justa, my daughters, myself and my wife… We want to stand up for housing and immigrant rights being immigrants ourselves. We want to help other people who were “blind,” who do not yet know that organizations like Causa Justa exist to help them. We will help where we’re needed and do outreach in the community. We want to know more about the other issues and injustices that are happening, as well as let others know of their rights and what they can do so that we can all live better and have a stronger community,” said Gilberto Nuñez.