Women’s Rights in the Age of Empire

Reflections on internationalist solidarity, in preparation for the 2013 World Social Forum in Tunisia 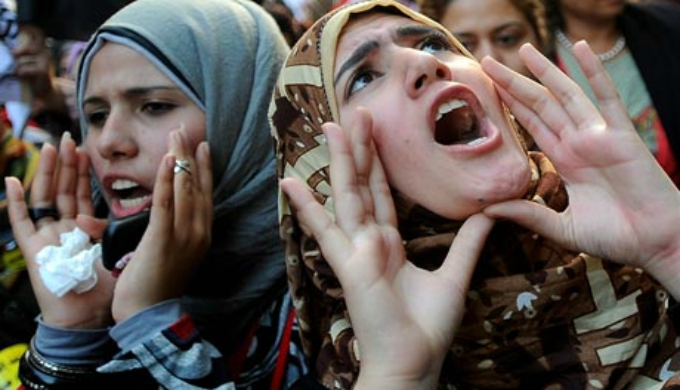 “Hijab is part of our culture!” yelled a young woman in a gold and yellow “hijab” Muslim headscarf, squared off against an older French blonde, whose chin and shoulders were pulled back, signaling how offended and taken aback she was. “You think feminism is taking off the scarf?” the young woman continued, “Why don’t you stop the wars in our countries, stop the criminalization of Islam in Europe? We do not want to be in your country but we have no choice but to migrate, now you want to take away our culture, too?”

The feminist debate I had read about was happening before my eyes, western concepts of feminism clashing with the priorities of women from the global south. I was participating in AWID’s (Association for Women in Development) international conference in Istanbul, Turkey. Surrounded by thousands of women’s organizations, funders and feminists, I experienced moments of palpable women’s solidarity, and also moments like this one – conflicts between political views and lived experiences emblematic of dynamics that have held the women’s movement back. These power dynamics are as old as colonialism, and sometimes just as entrenched. Women with good intentions and social and economic privilege aim to “save” women who are marginalized, women of color, immigrant women, women from the popular classes.

I couldn’t help but think of George Bush and his empire-building media spin – the claim that the US invaded Afghanistan not for access to oil and natural gas, but in order to “liberate the women.” His message of “women’s liberation” was accompanied by media images of the burqa, head-to-toe covering sometimes with only a mesh opening for breathing. This convinced many to support US military occupation.

What many missed after Afghanistan dropped out of US headlines was the subsequent integration of Afghan women into the globalized economy, as piecemeal garment workers and other low-wage work. The liberation that was promised, as it turns out, was actually integration into the lowest rungs of globalized capitalism – sweatshop-style garment work, sewing clothing for women in the global north, in living rooms and factories that produce for subcontractors of large corporations. Underneath the claims that this “access to money” liberates women, imbedded in the designer labels on women’s clothing around the world, a neoliberal restructuring is underway in the entire region.

What this approach did not include was any consultation with, or leadership from, the very women experiencing this form of oppression, or communities trying to fight it. Too often, we progressive feminists in the west can fall into those same traps, assuming we know what’s best for other women, uninformed or informed by dubious sources, and misusing economic and social powering a way that reinforces power imbalances that hurt our movement.

What would the Revolutionary Association of Women of Afghanistan (RAWA) have to say about this situation? Equally committed to the fight against fundamentalism as they are to the fight against the occupation and exploitation, their perspective is unique, and western feminist have much to learn from it.

I encountered similar themes in the preparatory assembly towards the World Social Forum in Tunisia. Despite the vastly different history and conditions, I heard about similar social justice movement questions: how to lift up self-determined feminism, a women’s movement from the grassroots, how to fight both oppression and exploitation, and how to build solidarity across differences. But there, in a social movement setting, I got a taste of what a more coherent, grassroots approach to women’s rights looks like.

This experience brought me to my own question, my own challenge, and our challenge in the US, the west, and the global north: what is our solidarity song with the women of the Maghreb/Mashrek? How can we build the kind of solidarity that does not impose from the outside, but instead learns from frontline communities by walking alongside them, looking directly at the imbalances of power and privilege that threaten to fragment our movement, and finding common cause?

In the crowded auditorium of a community college, the women’s assembly speakers were under a multi-lingual banner that read “Tunisia: Home to the World’s Social Movements.” About a third of the crowd listening with headsets so we could hear interpretation in different languages, as the women laid out several pages of demands. Some wore scarves around their necks, others on their heads, some not at all. They were Tunisian, and they had brought together women’s organizations from the entire Maghreb/Mashreq region. Building off the role their country’s social movement played in sparking the “Arab Spring,” they approached the forum process in an inclusive, regional way.

The demands they presented were incredibly intersectional. The right to organize was at the top of the list. In Tunisia, the massive popular movement that overthrew decades of dictatorship was preceded by women garment worker strikes in rural areas. The movement sought to defend the right to continue that organizing work, lifting up women’s economic justice demands.

And the list went on. From family survival issues like the price of bread, to leadership issues like equal representation of women in the planning of the forum, to regional campaigns like the right to inheritance for women, to liberation from interpersonal and state violence. It ended with the demand for free, legal and safe abortion. The room was eerily quiet by the end of the list. I was still catching the last bits of what was said via the headset, and, eyebrows raised, I scanned the room – how is this going over? I wondered. Would people support these bold demands? These women had just laid down the gauntlet. In a context where Salafists (hardcore Muslim fundamentalists) were regularly attacking women and their organizations, they were demanding that the movement as a whole carry women’s economic and social justice demands and lift up women’s leadership.

From the back corner of the room, a small chorus of male voices started singing. The Iraqi man sitting next to me leaned over to interpret: “They are from Morocco, this is a movement song that says ‘only men and women together can win the revolution.’ ” I was floored. Not only did the Maghreb/Mashreq region not need “saving” by northern feminists. They had a men’s anti-patriarchy chorus! In 15 years of community organizing in the United States, I have never seen such a beautiful display of solidarity as the one I saw that afternoon in Monastir.

This experience brought me to my own question, my own challenge, and our challenge in the US, the west, and the global north: what is our solidarity song with the women of the Maghreb/Mashrek? How can we build the kind of solidarity that does not impose from the outside, but instead learns from frontline communities by walking alongside them, looking directly at the imbalances of power and privilege that threaten to fragment our movement, and finding common cause? How will we weave together our own struggles and visions, coming from the US grassroots, to the struggles and visions of the women of North Africa, the Middle East, and the world?

Building our capacity for solidarity is a long-term, dialectical process. Generations before us have grappled with questions like this, we must learn from them, and step up to our challenge, in our time, place, and conditions. As we build dialogue on an international scale, crossing race, multiple genders, and languages, these ideas will grow, change, be challenged and expanded. Each country has its own unique dynamics and conditions, which set the stage for its social movements. As our concept of ourselves, and each other, grows deeper, so will our capacity for a truly internationalist feminism.

This month, the Grassroots Global Justice Alliance will take a group of us to the World Social Forum in Tunis, to learn & connect with social movements and the women who lead them, from South Africa to Tunisia, from Italy to Brazil. We will co-convene a session to explore these questions, and more: //www.fsm2013.org/node/2192. Stay tuned via our delegation’s blog.