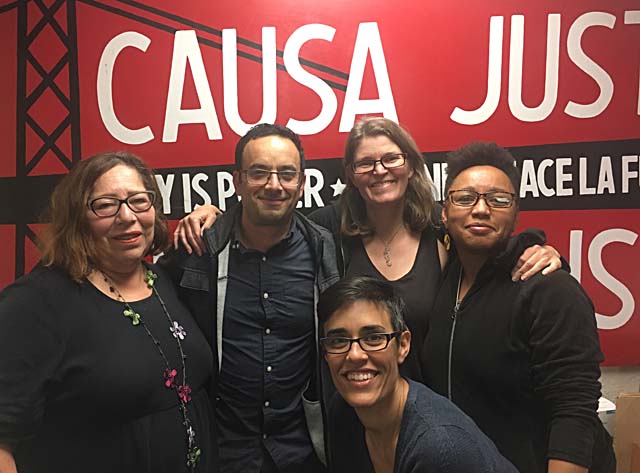 NTanya is co-founder and on the Coordinating Committee of Left Roots and Partner of Lee Turner Partners for Change Consulting
in Oakland.

With a family history of activism and childhood roots in the Black working class of Cedar Rapids, Iowa, NTanya has spent 30 years working for social justice.

Politicized by her experience of poverty, public assistance programs, and her mother’s resistance to the daily blows of oppression, NTanya spent her teenage years organizing her peers against Ronald Reagan’s military aggression and attacks on poor families.

She organized for racial and gender justice as a college student, and started the first LGBT student of color organization on campus.

In the early ‘90s she was active in grassroots, racial justice school reform campaigns, and was a member of Black AIDS Mobilization.

In both New York and Michigan, she organized progressive alliances between working-class Black and Latinx community organizations and white-led LGBT groups to fight a wave of anti-gay initiatives pushed by the Religious Right.

For eleven years she worked with Coleman Advocates as a youth organizer and then Executive Director to build the power of Black and Latinx families to win education, housing and budget justice in San Francisco, California.

NTanya and her partner Ayoka are raising their five-year-old in the Bay Area.

Michelle is currently the Program Manager at RoadMap, an intermediary that provides capacity building and organizational development support to social justice organizations across the country.
She is a former member and coordinator at the Center for Political Education, and worked for 14 years providing bookkeeping support for Bay Area left and progressive organizations. She has been active in student struggles; in the movement to challenge the Prison Industrial Complex; and is active with the Secret Garden Stewards Collective, a community garden in support of base-building and community resilience in the Mission. Michelle is also a member of Freedom Road Socialist Organization. A major source of enjoyment is watching her six year old, Carmelo, as he finds his way in the world.

Maria is retired but more active than ever. She has worked within the public sector in the field of aging for over twenty years.  As a Program Analyst for the San Francisco Department of Aging and Adult Services, she liaisoned with several non-profit organizations offering an array of services so elders and people living with disabilities can age in place with dignity and independence. For past two decades she has been a union activist, serving as a shop steward, mentor and union officer for the Service Employees International Union Local 790. She currently represents SEIU 1021 on the San Francisco Labor Council. A strong advocate for building community and labor power, she is active in Jobs with Justice SF.

Adam  is the  Director of Independent Political Organizing, Center for Popular Democracy. Adam has 20+ years of organization-building experience in the San Francisco Bay Area.  Adam  was hired as Campaign Manager for the Just Cause Evictions campaign in Oakland in 2002, the organization’s first staff position, and continued working with Just Cause (now Causa Justa :: Just Cause) for 13 years. In his time at CJJC, he helped to build up the organizing campaigns, electoral work and infrastructure, and helped facilitate two mergers with allied organizations.

Laura the director of Continuum of Care for Alameda County’s Everyone Home initiative, the county’s leading movement to end homelessness.

She was formerly director of the Mission Neighborhood Resource Center in San Francisco for over a decade.

Under her leadership, the center expanded free clinic services that include TB testing and primary care, and provided support for immigrant housing at Casa Quezada, a 52-unit supportive housing site in the Mission for the formerly homeless.

Guzman, along with her staff, also pioneered the city’s first Navigation Center at 1950 Mission Street.