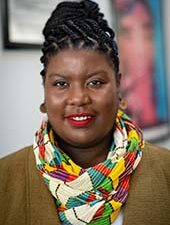 Shaketa brings her experience and wisdom to CJJC after years of organizing to defund the police in Buffalo, NY. Her approach to leadership is rooted in the belief that our liberation is interdependent and intertwined, and that when Black and Brown communities win, we all get more free. Shaketa’s fierce commitment to base building comes from the knowledge that only through building real power to transform capitalism can we achieve the changes our communities need and deserve.  Shaketa is excited about this new phase of leadership at CJJC because of the opportunity to support organizers and membership. Shaketa loves thinking about how we transform ourselves as we transform systems. When not at work, you can find Shaketa doing yoga, eating fancy ice cream, and finding joy in her family. If reincarnated, Shaketa hopes to return again as a Black woman. 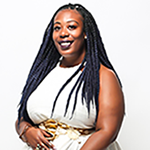 Brittini “Ree Belle” Gray (she/kin) joined  the CJJC team as the Deputy Director of Programs in October. She is a Midwest woman with deep Southern roots but holds a passion for Black and Brown issues across the globe, both nationally and internationally.  With over a decade of a wide array of organizing experience, from campaigns to end the school to prison pipeline, to public health and COVID-19 regional campaigns. She brings a wealth of experience in leadership development, team formation, curriculum design, fundraising, strategic and tactical campaigns, civil disobedience and direct action, facilitation, and much more. In addition to organizing, she also shows up in her public life as a politicized healer, exploring the balance between the need for innovative communal healing spaces and connecting to the root system of ancestral and indigenous practices. 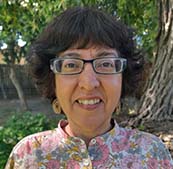 Kristen Cashmore (she/her) was fortunate to be working at Applied Research Center (ARC, now Race Forward) when People Organized to Win Employment Rights  – which merged with CJJC in 2015 – was taking its first steps. Kristen’s time with Grassroots Institute for Fundraising Training — as an intern, trainer, and Board Secretary — shaped her understanding of organizing and fundraising as sisters in the struggle. She draws on her extensive experience at human rights, public health, and environmental justice nonprofits for her role at CJJC. Kristen is honored to ensure her comp@s have the resources they need to build the power necessary to shift from a system driven by profit to one based on the needs and dreams of the people. 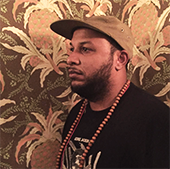 Julien Terrell, Director of Organizational Development
julien@cjjc.org
Julien A. Terrell was born and raised in Harlem, New York where he first developed his passion for social justice and popular education. He began organizing on issues of gentrification and environmental justice in Buffalo and NYC, connecting this work to the preservation of cultural and community spaces. Through his early movement experiences, he developed a deep commitment to fostering long-term leadership among young people of color through community and cultural organizing, study of resistance within Black and Brown communities throughout history within the US and internationally. He brings 17 years of experience in organizing, cultural work and leadership development of youth and adults with a specific focus making the commitment to liberation relevant and accessible to those he works with. After moving to Philadelphia in 2016, he joined Philadelphia Student Union as the Lead Organizer and served as the Executive Director for 2 years before transitioning. Since then he has been involved in providing educational and cultural development for schools and organizations throughout the country.
Julien lives in rural Pennsylvania with his family and is currently coordinating member and staff development activities for Cause Justa Just Caus 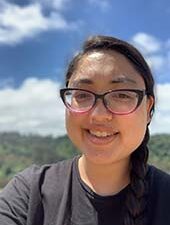 Becki was introduced to organizing and social justice during an internship with Just Cause Oakland (now CJJC) in the summer of 2007. She continued to expand her understanding of the social justice movement by working with organizations in New York City and SOMCAN (South of Market Community Action Network) in San Francisco. Throughout her years working with other organizations, she has stayed connected with CJJC. After becoming a stronger, more confident organizer working with UNITE-HERE in New Haven, CT and Las Vegas, she retuned to CJJC.  In her 8 years at CJJC, Becki has served as the Outreach Coordinator, Housing Land and Development Lead Organizer and is honored to be named Director of Contracts and Services. 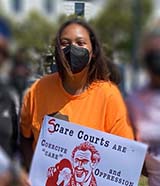 Ty has lived all around the Midwest and the Bay Area.  Ty is originally from Toledo, Ohio but grew up in Chandler, Arizona. They come from a background of electoral organizing and building power in the Midwest and Northern California with an emphasis on shining a light on poverty and helping lead the fight for dignified and equitable services/housing for low income, unhoused, and BIPOC communities. They are excited to use their background to build power and a strong member base at CJJC in the New Year. Ty is committed to the mission and values of CJJC professionally and personally. Before Ty’s time at Causa Justa they had been working in San Francisco, doing legislative advocacy and communications work for a non profit committed to finding long term solutions to homelessness and police violence. In June 2021, they began working on CART, the Compassionate Alternative Response Team, a specialized team of outreach workers which aims to eliminate the police response to homelessness and give folks warm handoffs to care instead of cold handcuffs. Ty has a lived experience of housing insecurity as well as police violence and is committed to making long lasting change for Black and Brown folks across the Bay Area. 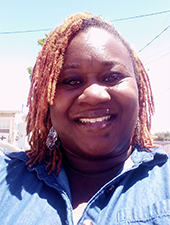 Kenisha’s passion for social justice began at a young age. In high school she graduated with a certificate in construction and electricity, proving to herself and her community that gender would not determine her career choices. Early on, she fell in love with the mission of The Innocence Project, and began her college education in paralegal studies to follow her passion to find justice for those who have been wrongfully imprisoned.

After witnessing firsthand the powerful work of CJJC organizers in action for years (her husband Jon Bean, previously held the position as  CJJC’s Outreach Coordinator ), Kenisha joined CJJC in March 2020 as the Executive Coordinator, where she is thrilled to continue supporting CJJC’s pursuit of housing rights, language justice, and building community power to create a better future for us all.

Kenisha is married with 5 children and very involved at their schools, holding the position as Chair of School Site Council (SSC), Vice-Chair in the English Learning Advisory Committee (ELAC) and a participant in Parent Teacher Association. She just received her Certification as a Medical Assistant, and plans to further work with the elderly, specializing in Dementia care and mental health. 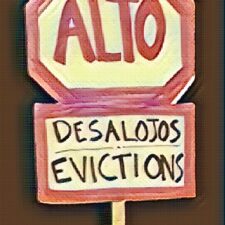 Lau leads our rights based services. 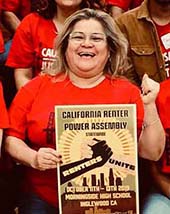 As a Causa Justa member and a long-time St. Peter’s Housing Committee member before our merger, Araceli has showed up everywhere from our local city hall to the U.S. Social Forums do the work of the movement. Now as staff at CJJC, she’s advising and supporting tenants and finds her work deeply fulfilling. 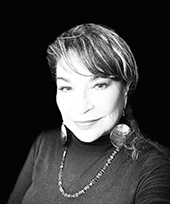 Rose leads our organization’s communications work. She’s originally from Los Angeles. Her family roots are in El Paso, Texas and Northern Mexico. She is Chicana and Tarahumara. She has worked as a writer, producer and editor in broadcast and print in both mainstream and community media. 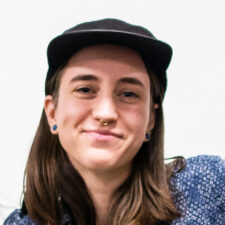 Hunter brings to CJJC a deep commitment to internationalism, prison abolition, and working-class solidarity against capitalism and white supremacy. They first became politicized through organizing to support Palestinian liberation and global labor rights. Passionate about transformative justice and community self-determination, they are dedicated to defending and creating space for communities to come together to organize collectively for liberation. Starting as a tenant rights clinic volunteer, Hunter joined CJJC as staff in 2016 and strives to resource and amplify the incredible voices and visions of CJJC’s members. 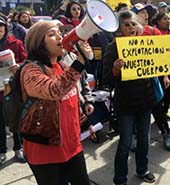 Cynthia has been a part of CJJC since 2019. She brings a passion for community organizing, abolitionist planning, and political education into the community rights team. Cynthia grew up in Southern California but has been in the Bay Area for 10 years with working experience as a labor rights advocate, a San Francisco public school teacher, and as an organizer. She is a recent graduate from UCLA’s Masters in Urban and Regional Planning program where she specialized in housing and community economic development. She understands the importance of building power among working class communities to leverage policies that improve the living conditions of its most vulnerable residents. Cynthia hopes to continue to build community power through extensive political education, expanding community care practices, and strengthening relationships through coalition building. 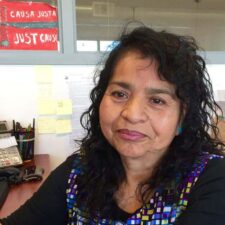 Gloria comes from a long line of organizers. She is part of a movement family and has been involved deeply in the fight for change since she was an adolescent. She believes that every human being deserves justice, housing, food and education and that together we can work to build a better world. 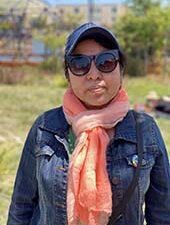 Lucía is a Bay Area based artist who has been working in the community in support of immigrants’ rights. In 2019, she co-founded the Bay Area Chapter of the organization Border Angels, and along with her comrades, eventually co-founded CALMA (Collective Action for Laborers, Migrants & Asylum Seekers). Lucía now brings her experience and background to fight for housing rights as she continues to fight for immigrant rights. As her philosophy is art is healing, she incorporates a social issue in mostly everything her hands create. 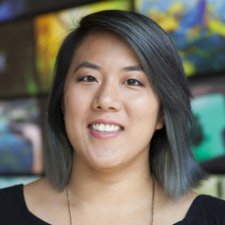 Cat Kung (they/them), Human Resources Coordinator
510.859.7675, cat@cjjc.org
Cat Kung is a queer healer-in-learning with a fierce commitment to nourishing Black and Brown dignity, health, and power. Causa Justa is an opportunity for Cat to practice their commitment and further cultivate their political growth.
They are a resident of Oakland’s District 2, where they live with their partner, garden, and emotional support Chiweenie.
Natalia Patiño (ella/ellx, she/they), Interpreter and SF Immigration Rapid Response Hotline Coordinator
Natalia@cjjc.org

Natalia is the first in their family to be born in the U.S. Growing up, Natalia would go to work with her mom who has been doing social work with immigrant and working class communities of color since immigrating to the U.S. Natalia first became politicized through their involvement in youth movements at their university, joining in organizing efforts around rights for students of color.  They have been involved in work with refugees and displaced persons fleeing from political corruption, violence, and genocide. They have facilitated education around medical apartheid, and are passionate about food, shelter, and healthcare as human rights. Natalia’s passion for facilitating development of leadership among youth was inspired by the mentorship and encouragement that she had as a youth. Natalia relocated to the Bay Area and joined CJJC in September 2019. In her free time she loves to cook, garden, sew, paint, and dance. 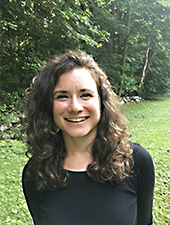 Lisa began volunteering with Causa Justa :: Just Cause shortly after moving to Oakland in 2012. Since then, she’s been proud to be part of multiple campaigns aimed at winning stronger tenant protections in Oakland and across California. She loves figuring out how to bring the skills and enthusiasm of volunteers to movement spaces, and in 2021 was thrilled to join CJJC as the Volunteer Coordinator. In her spare time, she supports the data & research efforts of Initiate Justice, an abolitionist organization building the political power of currently incarcerated people and their loved ones, and organizes white people to be part of racial justice movements through Showing Up for Racial Justice (SURJ) Bay Area.