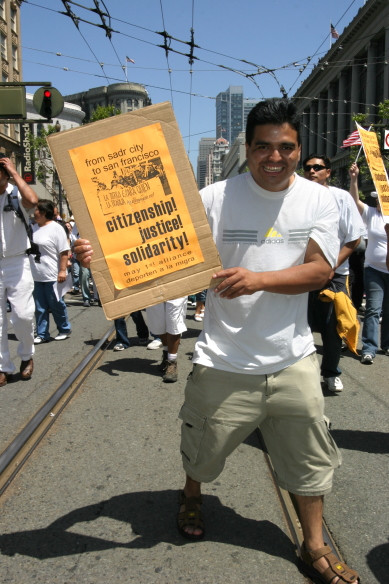 We believe that Black-Brown unity is foundational for the development of a vibrant grassroots movement, and that building that unity is crucial work, now more than ever as the two communities face the worst effects of an evolving economic crisis.  But, genuine unity can’t be built in the abstract, or in a race-blind way. It has to be forged through real relationships and shared struggle, and at Causa Justa :: Just Cause we are creating a context for that.

We know that living in the same neighborhood, having the same landlord, or going to the same polls does not itself create solidarity.  Even when people have the same material interests, there is no guarantee that they will identify those interests, or see themselves as tied to others with the same interests.  In fact, while Black and Latino communities have the same interests in the long term, in the short term our interests do sometimes come into conflict.  We often come into contact with each other most significantly only once when we have been pitted against each other, in a competition for employment opportunities, affordable housing, or basic services.

Many Latinos in the US have been convinced to distance themselves from criminalized Black communities, and are being offered a vision of an upgrade in status if they only work hard and keep their heads down, and place the blame on Black communities for what are ultimately systemic problems of violence and criminalization in low-income communities.  The Latino community experiences violence, but more often experiences economic coercion – which is the driving force of migration, and sets the conditions for hyper-exploitation inside the US as a workforce strategically disenfranchised from its rights without access to legal status.

Many Black people in the US have been convinced to hold immigrant Latinos responsible for the economic conditions of massive unemployment and divestment in Black communities, and are being offered a vision of an upgrade if they can just keep out the masses of exploited Latino immigrants who are populating the US, in order to prevent them from jumping ahead in line.  The Black community experiences economic coercion, but is more often shaped by experiences of brute state force – which is the engine of the prison industrial complex, and sets the conditions for a permanently disenfranchised and unemployed Black workforce outside of jails and prisons, and a hyper-exploited workforce within jails and prisons.

But the points of connection are many, and are rich.

Latino communities in border regions, and in places where the Latino population is new and growing through immigration, experience wholesale violence that Black communities in the Southern US have resisted for decades, and can offer rich lessons about. Black communities in urban centers also have much to teach about the fight for worker’s rights, and are the backbone of what is left of trade-union militancy, which corporations were able to break only by moving their operations overseas, and relying on the global context to lower wages in the US. A Pan-African framework offers an example of internationalism that is articulate about the different experiences of different national identities, while creating a coherent and progressive-identified whole.

Black communities in underserved inner cities experience a lack of economic development that Latino communities are very familiar with in their own countries, which propelled national liberation fights and gave rise to the current-day models of human-centered development in the Latin American progressive bloc. Latino communities in the US are the largest growing not just in population but also in participation in grassroots and progressive organizations, and offer the US movement the possibility of re-invigoration, and of being rooted in the working classes.  Frameworks that reject empire-building offer a model of internationalism that is articulate about the role of the US in shaping the economic system that in turn shapes all of our experiences.

As Latinos become racialized and divided into documented and undocumented, we are well served by an understanding of the experience of the Black Community and the struggles around questions of assimilation, integration, and full citizenship that the movement has grappled with over time.  Latinos are a growing force in elections, in unions, and is mass based organizations in the Bay Area.  Whether the population increase of Latinos will move politics towards a more progressive future remains to be seen, and can be shaped by community organizing and civic engagement initiatives.

These are some of the ideas we explore in our political education and leadership development work, building our understanding of the complexity and connections, analyzing the short and long term interests of each community, and setting the groundwork for building a common agenda.

Interpretation is also core aspect of our work. The literal kind – making it possible for monolingual English and Spanish speaking neighbors to talk with each other about the experiences they have in common, like foreclosure, neighborhood blight, landlord harassment, racial profiling.  And, the figurative kind – interpreting the different experiences of each community as part of a larger narrative, acknowledging stratification inside our communities, and how Black and Latino people are recruited and tracked into particular relationships to the economy – particular jobs, particular neighborhoods, and particular relationships with the government. Women in each of these communities have a unique experience of both the formal labor market and the informal labor market, and/or in unpaid reproductive labor in their homes. While individuals make decisions (what job to apply for, whether to attempt migration), these decisions are made within a systemic context that individuals do not control.  This context literally acts a set of parameters for their lives, limiting choices and opportunities.  Black and Latino communities experience different proportions of the carrot and the stick of government policies and social forces, depending on the time, place and conditions they exist in.  Grounded in an honest assessment of those, we can dig into the contradictions that emerge, understand each of our communities better, and build towards unity within and across them.

And we do so by meeting people where they are. We work side by side with everyday people who are struggling to pay the rent, avoid a deportation, or keep their home. That relationship of trust with an organization is crucial in order to engage in often challenging conversations and deep political education that build cross-racial unity.  Building from those relationships and from the bread and butter fights for reforms, our organizations must offer our communities a framework that reaches beyond the employment office, the rental application, and the service center waiting room, a framework that looks at the economic forces that set the conditions for what happens within and between Black and Latino communities.  Strategic community organizing takes this into account, and creates solidarity by offering a place for dialogue, learning, and one-on-one relationship building, a framework to help build a common agenda, and opportunities for joint action.

FOR THE RIGHT TO THE CITY

Our experience has taught us that the fight for the Right to the City is a natural and powerful place of connection between Black and Latino communities who are living the worst impacts of an ever-deepening housing and economic crisis in California. Being able to work on a regional scale allows us to connect the dots, following broader patterns of urbanization and displacement.

Displacement is a common feature in the lives of Black and Latino families in the San Francisco Bay Area. The globalized economy pushes and pulls people towards urban centers in search of work, greater opportunity, and what’s left of the social service infrastructure. This is true for migrants who come from Latin America today, as it was for Black migrants who arrived from the Southern US two generations ago. Indeed, it’s true for millions of working families of all races, on an international level. Gathered in these urban centers, we have a unique opportunity to build a multi-racial, class-conscious agenda for human rights.

David Harvey defines the concept this way: The right to the city is far more than the individual liberty to access urban resources: it is a right to change ourselves by changing the city. It is, moreover, a common rather than an individual right since this transformation inevitably depends upon the exercise of a collective power to reshape the processes of urbanization. The freedom to make and remake our cities and ourselves is, I want to argue, one of the most precious yet most neglected of our human rights.”

That human right, that collective power is fundamentally important in our region. The Bay Area has one of the most expensive housing markets in the country, with a powerful real estate sector that has a great influence on local and state politics, and develops luxury housing catering to high-income people who work for tech innovators like Google, Facebook and Twitter. The Bay Area is also home to the fifth busiest container port in the country, where millions of dollars of goods made by exploited workers in Asia, Latin America, and the Middle East and North Africa enter the country for distribution and sale. The infrastructure to manage and sell those goods makes San Francisco a command center of the globalized economy, connecting us to the rest of the world in deep but often invisible ways.

At the same time, working class families in the Bay Area have a very different experience. Oakland is an epicenter of the national foreclosure crisis, with families (homeowners and renters alike) struggling to keep a decent roof over their heads in the face of absentee banks who control their homes. Working class and poor San Franciscans who have managed to keep their homes despite wave upon wave of gentrification live in overcrowded, often uninhabitable conditions while suffering from harassment and racial discrimination.

The fact that our base lives at the intersection of this contradiction provides ample opportunities to organize for concrete reforms, understand the systemic nature of displacement, develop movement leaders from the working classes, build influential civic engagement initiatives, and advance a broader progressive agenda.