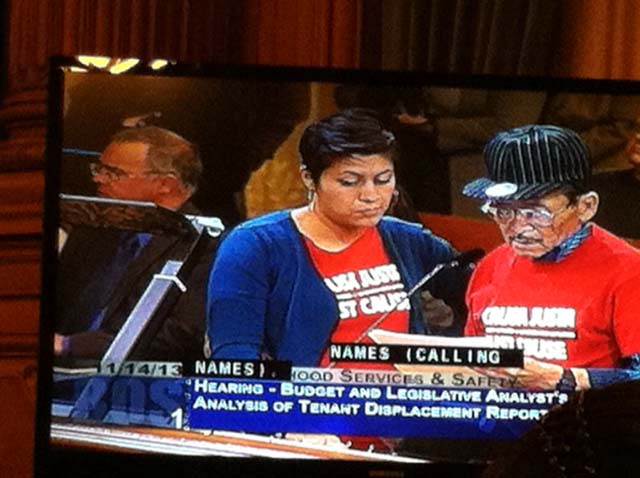 A damning Anti-Displacement report released November 14 looking at the level of housing displacement in San Francisco found what many people already know, that evictions are up sharply.

At the same time, a Tenant Convention is taking place on THIS Saturday, November 23, from 10am-3pm. Co-Hosted by Mission Beacon Community Center at Everett Middle School 450 Church St. SF, for this groundbreaking bilingual tenant convention will look at solutions and options for tenants who are facing displacement.  Please come and be part of a conversation with your neighbors about what kind of neighborhood you want and how we can begin to make that vision real.
Join us and RSVP here.

That number does not include the many tenants who are displaced after agreeing to vacate their units in exchange for financial settlements with their landlords.

The hearing, at the SF board’s Neighborhood Services and Safety Committee, was requested by Sup. Campos.

He told the packed room (and overflow room), “We’ve been hearing of a number of cases of displacement and evictions. A lot of that information gave me the sense that something was happening in this city. It is important to have more than anecdotal information. That is why we commissioned the report and now we have concrete information. Unless you understand the magnitude of the problem you cannot come up with a solution.”

People being evicted face a rental market where the median rate is over $3,000 with all indications that the 2013 rate will be higher. Plus the vacancy rate has declined to a low of 2.8 percent in 2012.

One of two households in San Francisco are paying more than then 30 percent for their rent. An analyst for the Budget and Legislative Analyst stated that between 2010 to 2012, the city population has increased by 20,400. “With only 122 new housing units there is great pressure and you can demand a much higher price. That could explain the interest in landlords to Ellis Act their places.”

Part of the reason for the hearing was not only to get a better grasp of what is happening to this city and the data, but to put a human face on it. “For every displacement number there is a person and that family being impacted,” said Sup. Campos.

There were countless stories of tenants who had been or who are facing eviction In the City, people who had lived in their city 25 to 30 years or more.

Said Sup. Campos: “We have a crisis and it goes to the very question as to who we are as a city. Are we a city that will allow working class people to live in this city? Will this become a tale of two cities? In some neighborhoods you are talking about people spending close to 60 percent on their housing. We have to act quickly to respond to this crisis and I believe this is a crisis.”

Asked Beverly Upton, one of the tenants who testified: ““Who will be left when the artists, organizers and those who care are gone? Who will be left to care about our city? This is our heart and soul.” She added of her own apartment, “We’ve paid for every improvement done in 25 years and now we have to leave.” She is deciding whether to accept a buyout or face an Ellis Act Eviction. This appears to be a common tactic used by landlords to remove tenants without having to report to the SF Rent Board.

Several pieces of legislation are being suggested including the tracking and reporting of “buyouts” to the Rent Board. Currently some landlords give tenants a lump sum without having to file an Ellis Act eviction and so do not have to report this to the Rent Board. Proposed legislation would require that they have to file these buyouts.

Landlords would also be prohibited from charging market rate prices after a buyout.

Mayor Ed Lee also announced he was joining Sup. Campos and other legislators to make a move to change state law to allow cities and counties more flexibility to regulate Ellis Act evictions.

Lee told Bay City News: “While we have some of the best tenant protections in the country, there are a small number of speculators out there who are turning a quick profit at the expense of long time tenants. A carve out for San Francisco is good policy and will help us support middle income and working families here in San Francisco.”

Sup. Campos also said he will ask City Attorney Dennis Herrera to draft legislation doubling the amount of relocation assistance landlords must pay tenants when they evict them under the Ellis Act.

State Assemblymember Tom Ammiano, responding to San Francisco Housing situation stated: “The pace of evictions has gone beyond what is acceptable and it is time to do something to control it. What we are seeing is a very diverse group of tenants being evicted or pressured to leave their homes – sometimes where they have lived for decades. This threatens the diversity that San Franciscans have always treasured.”

He added, “It is very early to talk about specific legislation from my office, but I am eager to introduce a bill in January. One option might be a law that will allow the local jurisdictions, like San Francisco, to suspend the Ellis Act or establish a moratorium, because of the emergency housing situation.

“Another possibility is working to make sure that landlords are not skirting Ellis eviction requirements by improperly pressuring tenants to leave. I have been working with Supervisor David Campos, holding discussions about what he can do and what we can do in Sacramento. I support his efforts to get fair compensation for people who are dislodged from their homes at a time when they are unlikely to find new affordable options in the city.”

Candelario Melendez, Causa Justa :: Just Cause member and volunteer told supervisors: “In one day I saw three cases come into our office where the tenants were roughly evicted, they came home and found their locks had been changed, even though they were up to date on their rent. The landlord would not even let the mother come in to get her daughter’s asthma medicine. For two days her daughter went without it.

Finally with help of advocates, the mother was able to go back and get medicine. And on one afternoon I decided to keep track of how many people came in for help — we saw 30 people who came in for evictions. Only on one day  — ALL were for help with an eviction.”

Said a speaker from Senior Disability Action: “This city is not the place where middle class people can live or where families can live. There’s nothing sadder than schools and neighborhoods without children. When you talk about fighting for the soul of the city that is exactly what we are doing.”