AB1081, the Trust Act, passed its first hurdle Tuesday as supporters packed the small room inside the state capitol. Outside the doors a long line winded down the hall as people waited to testify in support of the bill, including members of Causa Justa :: Just Cause. By a vote of 4-2 the Public Safety Committee passed the bill out of committee where it now heads to the full assembly. 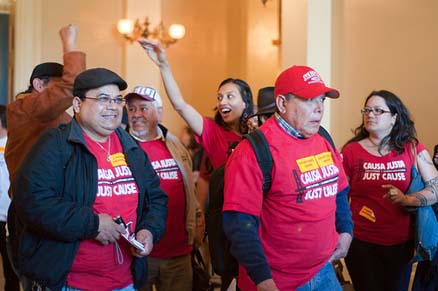 Once it passed cheers could be heard outside the room and later, a large impromptu circle formed in the hall outside and chants of “Si Se Puede!” echoed throughout the chamber. Supporters from throughout the state showed up to support the bill.

California was one of the earliest states to sign up for the program in Spring 2009. The state has become the so-called model for the Secure Communities Program.

S-Comm is a federal program that enlists local law enforcement to take part in civil immigration enforcement through the sharing of fingerprints when someone is arrested and allows ICE to detain and deport undocumented immigrants.

In February, California Assembly Tom Ammiano introduced AB1081, or, the Trust Act, which among other things, would allow local communities to decide whether or not opt-in to the program.

Stated Ammiano: “S-Comm is an extremely problematic program….  While the United States’ ICE stated mission is to target… serious offenses, the program casts far too wide a net. ICE’s own data shows over 70 percent of people deported under S-Comm had no convictions or were accused only of minor offenses. Unfortunately this program is unfairly impacting innocent people, victims of crime, and even survivors of domestic violence who have called the police for help.”

One of the women who testified was Norma O., who told committee members how she was detained by ICE after calling police for help when her husband beat her up. In an interview after her testimony she said “I’m fighting for the Trust Act. because I was a victim of domestic violence and when they arrested him they said I hit him as well, so they took us both in. and we spent five days in jail. They deported him but sent us both to ICE. I didn’t realize this would happen to me and to my son who is 3. I suffered those days. The Secure Communities program doesn’t give security, I was a victim of violence. Now I am in the process of deportation. I don’t know what’s going to happen in my case, and I’m afraid. But I also want to fight for this bill and speak out so that this doesn’t happen to other women in my situation and other immigrants.”

Sheriff Michael Hennessey told committee members that he was concerned about the bill because while its goal is to deport serious and violent offenders convicted of serious crimes, it “sweeps up virtually anybody. Anyone in a traffic matter, anyone who steps forward as a victim of crime and their fingerprints are run… it’s been a very frustrating experience.”

Rep. Zoe Lofgren (D-Califronia) told the Los Angeles Times that she will call for an investigation into S-Comm and alleges that Dept. of Homeland Security officials misled the public about whether the program was voluntary. Lofgren is the top Democrat in the House immigration subcommittee.