“They talk about undocumented workers taking jobs but I’d like to know what would happen if for one day, all the undocumented laborers would stop working.” — Former Pacific Steel worker 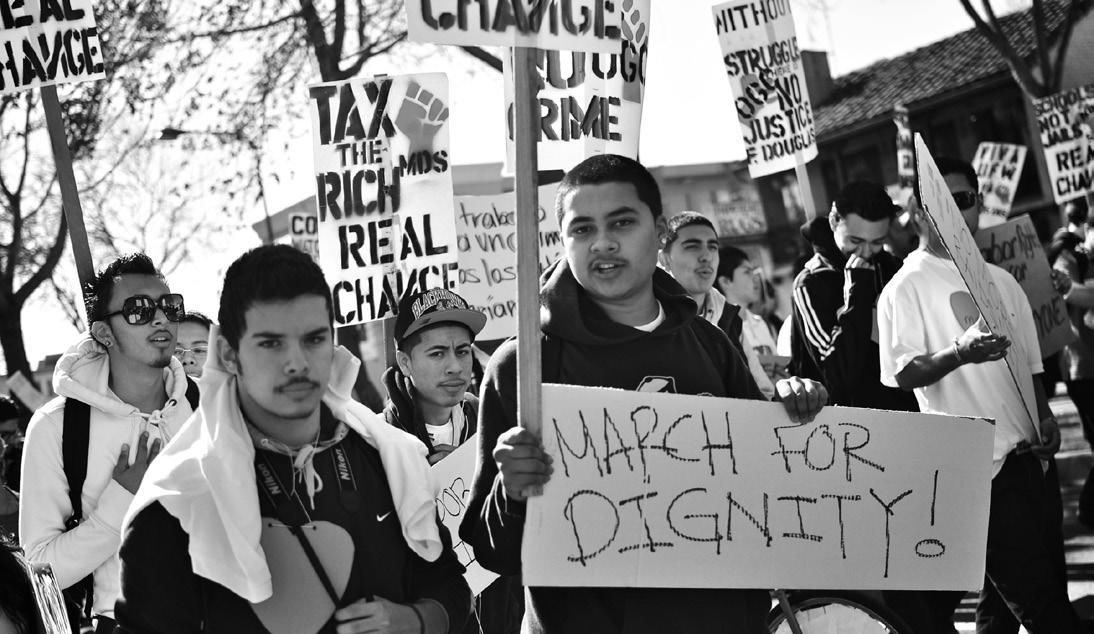 More than 200 workers fired after an I-9 audit at Pacific Steel Casting plant in Berkeley, marched Feb. 20, to protest the “silent raids” they say are devastating to their families and livelihood. Organized by the Committee of Fired Workers From Pacific Steel Casting, their statement read: “We will march with our heads held high, undocumented and unashamed.”

In a federal workplace audit, the government checks the validity of Social Security numbers and demands the firing of any worker who is undocumented and cannot provide a valid number. Tens of thousands of audits, done through no-match letters, I-9 audits and the “E-Verify” program, have led to massive firings across the nation.

Many of the Pacific Steel workers had been at the company for years. Adrian Pacheco worked at the plant for 7 years. The father of five said that he’s been working “here and there. It’s hard. We are accustomed to a work routine and then it’s snatched away. It’s sad … we were working not robbing.” He added that they worked “hard and long…. between 8 to 12 hours a day. We were pushed.”

As each worker was fired they received payouts for whatever vacation they had accrued and two weeks pay. Even so, for Pacheco, it was humiliating. He said that he along with several other workers were officially laid-off on a Tuesday, but had to come back for their final pay on Thursday. The company didn’t have the money ready for them on their last day. “The company sent us away and without even a ‘thank you,” there was nothing.” After years of benefitting for a lower paid workforce Pacific Steel submitted to an I-9 audit. Tens of thousands of these audits have been conducted throughout the country.

For another former worker at Pacific Steel, the audit complicated his potential kidney transplant. Jesús Navarro had a matching donor and private insurance, which would pay for the procedure. He waited for years and had finally reached the top of the transplant list. As doctors and administrators at UC San Francisco Medical Center consulted him they learned of his immigration status and refused to do the surgery because there was no guarantee the drugs and after-treatment would be paid for. The after-care drug costs to prevent organ rejection are $20,000 a year.

The kidney would be transplanted from his wife who is a match. Although Navarro now pays for the private insurance he once had through his job, the option lasts only 18 months. Because of his release from his job of 14 years, he could end up on the state’s Medi-Cal program, which won’t pay for transplants for undocumented patients.

A story about his dilemma appeared in several news outlets and a several petitions went out by the Alameda County United in Defense of Immigrant Rights, (ACUDIR) and the Pacific Steel Worker Committee, and Change.org. More than 140,000 signatures were collected protesting Navarro’s treatment by UCSF. Not surprisingly, administrators retracted their decision and agreed to give Navarro his transplant. A joint statement went out issued by UCSF and Navarro basically saying it was all “just a misunderstanding.”

For Navarro, the I-9 audit and his job loss unraveled his life and could have even led to his death. Fortunately, for Navarro, he is going to get treatment he needs due to the overwhelming support that has poured in for him.