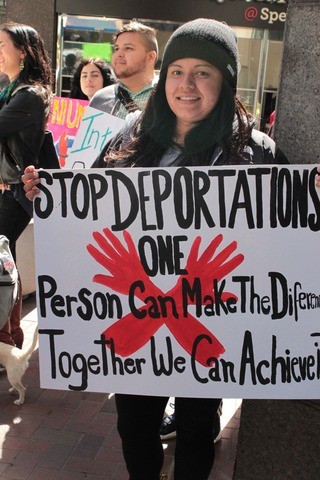 The backlash against the draconian and inhumane administration of disastrous federal deportation policies is growing.

In a complete turnaround, Alameda County Sheriff Gregory Ahern announced last week (May 21) that he would stop holding people in jail for extra time under unconstitutional and unjust immigration “hold” requests.

Before the announcement, any immigrant in Alameda County could be apprehended, held, and ultimately turned over to ICE authorities for deportation. Every year, ICE makes approximately 1,000 requests to Santa Rita jail in Alameda County to hand over immigrants arrested on other charges but suspected of being undocumented. “Now we won’t be honoring any of them,” Sheriff Ahern told the San Jose Mercury, adding “We’re not going to be honoring the ICE holds unless they’re backed by the order of a judge.”

These counties join Santa Clara and San Francisco in pushing back on ICE holds through local laws, and build upon the protections of California’s TRUST Act, a state law which placed limits on sheriffs’ assent to ICE hold requests while warning that each hold risks violating the US Constitution. Sheriff Ahern’s announcement builds on his January memorandum limiting when Alameda County would acquiescence to ICE hold requests.

“When we fight, we win! It is a victory for Immigrant communities and the values of due process and equality,” says Cinthya Muñoz Ramos, Co-Chair of ACUDIR (Alameda County United In Defense of Immigrant Rights) and CJJC Regional Lead Organizer, Immigrant Rights.

“For years, Alameda County families have organized, raised their voices and demanded an end to immigration holds. The holds that have torn apart families, wasted local resources, and threatened the most fundamental principles of the justice system. In February, after much work with community members, the Sheriff took an important step toward ending this injustice by enacting a strong policy to implement the TRUST Act.”  #NiUnaMas #Not1More