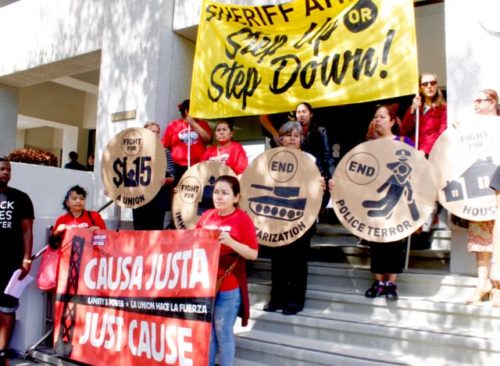 By Claire Urbanski and Beth Spitler of BASAT

OAKLAND — Building on the actions of #MayDay2016, community coalition “Oakland Sin Fronteras” rallied and held a press conference in front of the Alameda County Sheriff’s Department, taking over the front steps and spilling into the street, on Monday, May 2.

In front of banners reading “Sheriff Ahern, Step Up or Step Down” and “Which Side Are You On,” speakers addressed a crowd of about 100, reiterating demands previously delivered by community leaders to Sheriff Ahern on April 14, 2016.

“I am so excited to be here on the second day of unity and resistance among the people. I’m excited that we are merging our movements together,” stated Cat Brooks of the Anti-Police Terror Project. “We are supporting each other with people power from various movements and organizations for one reason: to get justice for the people!” 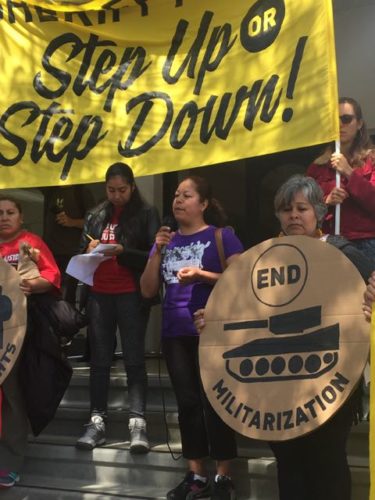 Speaker demands included Sheriff Ahern cease collaboration with ICE and the resulting violence against immigrant communities. “We often don’t get to go in front of a judge to fight our case–people are just placed in deportation proceedings and deported the next day. We have to ensure that this stops!” insisted Maria de La Luz of Mujeres Unidas y Activas through a translator. They also demanded an end to the Sheriff’s deadly contract with Corizon–a for-profit medical services contractor in the Alameda County jail–and diversion of funds from a planned Santa Rita jail expansion.

“Sheriff Ahern’s Santa Rita Jail is the 3rd largest in California and the 5th largest in the United States. The U.S. has 5% of the world population and at least 25% of the world’s prisoners. California is the largest imprisoning project in the world,” said Tash Nguyen of the Ella Baker Center for Human Rights. “We demand that the board of supervisors–[Sheriff Ahern’s] bosses–instead invest their $5.4 million county match in alternatives to incarceration. This looks like community-based solutions and supportive housing for folks with mental illness and everyone in Alameda County who is facing displacement.”

Omar Abdelmegeid of the Arab Resource and Organizing Center spoke to Ahern’s participation in the increasing militarization of the police force through his support of Urban Shield, which, he said, “gives unchecked occupational capacity [to law enforcement] to conduct raids and arbitrary arrests.”

Speakers also charged the sheriff with contributing to the gentrification and displacement of Alameda County communities.

“Sheriff Ahern, how many times have you allowed the evictions of thousands of families who were at no fault, but still had to leave their homes? How many?” asked Selene Chala of Causa Justa Just Cause.

The letter to the sheriff, delivered on April 14, demanded Sheriff Ahern desist from implementing policies targeting communities of color, migrants, poor, and indigenous people through policing and imprisonment.

“Training for the cops cannot and will not ever alter the fundamental role of law enforcement, which is to stop, arrest, jail and kill our people as they see fit. Modern day police departments are the descendents of slave catchers; they are the descendents of slave masters,” stated Alicia Bell of Housing Rights Committee of San Francisco [VIDEO: //twitter.com/BaySolidarity/status/727211900535078912] 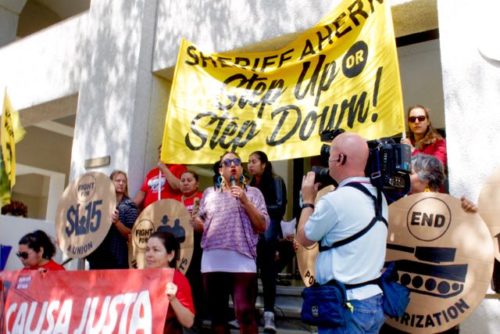 he sheriff’s lack of transparency and collusion with police violence by demanding that coroners’ reports be made public within 30 days: “[Law enforcement] takes as much time as they can to get the [families of police victims] the coroner’s report. The coroner’s report is the only report–the only tool–that the family has, in addition to an independent autopsy, to push back on whatever lies they have said have resulted in the death of a loved one. On top of that, families only have a year to file a lawsuit, which may be the only form of ‘justice’ they’re ever going to get.”

Following the press conference, the crowd marched down 14th street to Oakland City Hall, chanting and carrying yellow flags that read “Alto A La Migración Forzada” [translation: Stop Deportations] and “Defend Workers Rights.” The coalition has given Sheriff Ahern until May 29 to respond to their letter.