Hundreds March on DNC With Daughter of Berta Cáceres

PHILADELPHIA–Several hundred grassroots organizers from across the country marched on the Democratic National Convention bearing a masks and a giant puppet of the Honduran Indigenous activist Berta Cáceres.

They were joined by Berta’s daughter, Laura Cáceres, and Rosalina Dominguez, a leader from COPINH (Civic Council of Popular and Indigenous Organizations of Honduras), who have traveled to the DNC as part of the It Takes Roots People’s Caravan.

“On March 2nd, an ancestor, a guide was born; a spirit who now guides us. Defending life, the rivers, and the planet… and defending ourselves and our lives is fighting for the life of all humanity.” —Laura Cáceres, Pittsburgh, July 22, 2016

These actions are being led by Grassroots Global Justice Alliance, a multi-racial grassroots alliance of community organizations who also face environmental injustice and state violence. 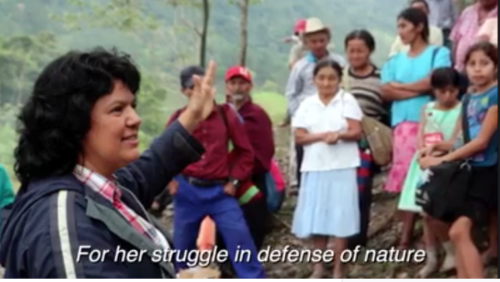 Berta Cáceres, a Lenca woman, was one of the leading organizers for indigenous land rights in Honduras.  Internationally recognized for her Human Rights work, Cáceres won the renowned Goldman Environmental Award in 2015 for her leadership in the campaign to stop one of Central America’s biggest hydropower projects, the Agua Zarca cascade of four giant dams in the Gualcarque River basin.  On March 2, 2016, Berta Cáceres’s life was assassinated when armed gunmen stormed into her home and shot her.

“The racist violence that says that we, Indigenous people, Black people and all non-white people are incapable of thinking and dreaming of other forms of development or of self-determination of our lands was concentrated in the body of my mother on March 2nd,” says Laura Cáceres, “But also on March 2nd, an ancestor, a guide was born; a spirit who now guides us. Defending life, the rivers, and the planet… and defending ourselves and our lives is fighting for the life of all humanity.“

The proposed legislation would “suspend U.S. funding to the Republic of Honduras for their police and military operations, including funds for equipment and training, until the Honduran government investigates credible reports indicating the police and military are violating citizens’ human rights, especially the unlawful and extrajudicial killings, of human rights activists, environmental activists, LGBT activists, human rights defenders in Honduras,” as Rep. Johnson stated on Democracy Now.

The murder of Berta Cáceres and the continued targeted harassment and assassinations of grassroots leaders in Honduras has put a spotlight on the critical role of US military aid to the repressive regime in Honduras. In the four years following the military coup of 2009 that ousted democratically elected President Manuel Zalaya, military, paramilitary and police forces killed over 100 social justice, indigenous and environmental justice activists in Honduras.