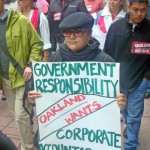 While Washington was engaged in a manufactured crisis over the debt ceiling, some 40 million people are living in a real crisis, dealing with whether to buy groceries or pay the rent.

The biggest players on Wall Street have foreclosed the homes of millions of families, attacked labor and front-line workers, and funded the criminalization and incarceration of poor people at record rates. Wells Fargo and others are among the biggest investors in private prisons in the United States.

Big Finance has held the people of the United States up for hundreds of billions of dollars and received a handout from the Troubled Asset Relief Program (TARP), otherwise known as the Big Banks Bailout.

ENOUGH! Join us here in SF along with social justice groups from across the West Coast in a Great American TARP Tour of the Dirty Deeds of Big Finance

Collectively the Big Banks: Wells Fargo, Bank of America, Chase and Citibank are responsible for millions of dollars in unpaid taxes that go towards the vital services our communities need. If corporations had paid their 40% in 2010, this would have created $230 billion in revenues.

Be part of a collective voice for corporate accountability!