Oakland’s housing affordability crisis is deepening inequality and forcing working-class communities of color out of the city. Rent stabilization is an essential policy tool to stop displacement and must be applied uniformly to duplex and triplex buildings. Oakland City Council has a clear mandate from voters to strengthen rent stabilization protections. While the city of Oakland has a responsibility to support struggling homeowners, that support cannot continue to come in the form of an exemption that encourages the displacement of working-class Black and Brown tenants.

Oakland is in a housing affordability crisis that more market-rate construction can’t fix. We need to build more truly and permanently affordable homes for our residents who need them the most. This construction, however, will take years and must be pursued along with increased enforcement of existing tenant protection laws and immediate anti-displacement and homelessness prevention interventions. We must protect tenants NOW in order to preserve the affordable spaces low and middle-income Oaklanders already call home. 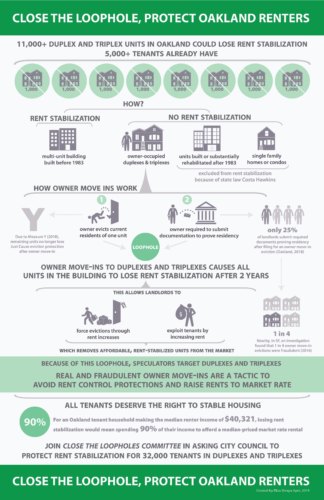 Click to see how this loophole works to push out tenants

Oakland’s rent stabilization laws have proven to be one of our strongest and most cost-effective tools for keeping people in their homes and stopping working-class displacement. Oakland council members have the responsibility to act to preserve affordable housing in Oakland. City Council must vote to update the Rent Stabilization Ordinance and remove an exemption that allows for tenants in duplexes and triplexes to be stripped of rent stabilization if their landlord or landlord’s relative lives in or moves into a unit on their property.

About 56% of Oakland’s housing stock is rent stabilized.[viii] 62% of Oakland voters, as well as a majority in Alameda County voters, supported efforts to update and expand rent stabilization with Prop 10 in 2018. Rent stabilized housing is a dwindling community resource – aging housing stock, condo conversions and numerous exemptions cause Oakland to lose an untold number of affordable rent-stabilized units every year.

Passing this ordinance would immediately: 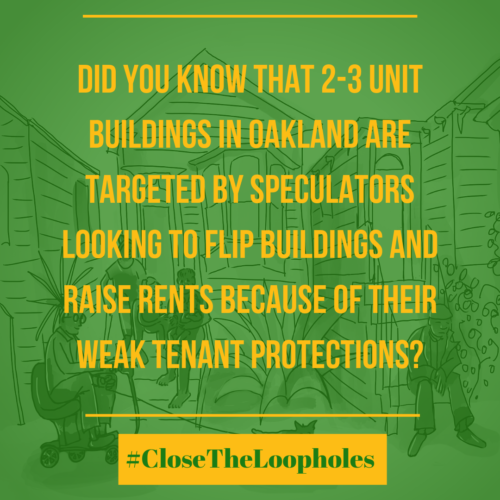 Without rent stabilization, Oakland’s “Just Cause” ordinance is limited in its ability to protect tenants. If a tenant cannot afford to pay a rent increase that doubles or triples their rent, the increase effectively functions as an eviction. In the wake of Measure Y, organizations providing tenant counseling services have seen a spike in the number of tenants at risk of displacement because of massive rent increases. Eviction via rent increase is an easy way for property owners to get around the will of voters and avoid paying for buyouts or the relocation payments these tenants would otherwise qualify for under the Uniform Relocation Ordinance passed in 2018.

Oakland has a duty to homeowners and tenants

Oakland’s housing affordability crisis is pushing out working-class communities and people of color, whether they are tenants or homeowners.

This duplex triplex exemption exists because the city recognized that working-class homeowners were and are struggling to stay in Oakland and that becoming a landlord is one path to homeownership. However, struggling small property landlords already have strong protections and leaving this loophole open endangers thousands of already at-risk tenants.

If this ordinance is updated, landlords that can demonstrate hardship will be able to petition to raise rents above the yearly percentages allowed by the Rent Board. In the event that they wish to move in a relative, the Mayor’s new budget has allocated funds to support struggling landlords in paying relocation fees to displaced tenants. The City of Oakland has a responsibility to make sure landlords are aware of these protections.

City Council cannot allow this loophole to continue to shift the expense of their responsibility for supporting homeowners onto the backs of tenants. Since working-class Black and Brown tenants cannot afford to subsidize struggling homeowners, to deny them rent stabilization is to issue an open invitation for these tenants to be replaced by wealthier residents and makes this exemption yet another policy in which the City of Oakland is enabling the economic forces changing the heart and soul of our city.

[ix] Estimates made by Causa Justa :: Just Cause based on research made by the UC Berkeley Urban Displacement Project and a review of census and parcel data. Estimates are conservative and attempt to exclude units build after 1983 that would not be eligible for rent stabilization and those which may have been converted to condos.