Tenant Organizing from the Ground Up 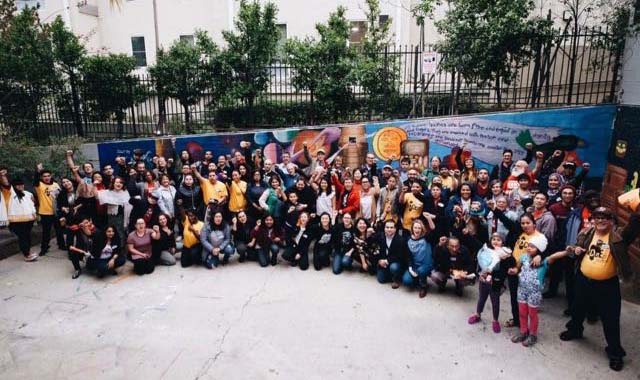 California is home to over 16 million renters, 45% of the population, and the majority of us are low-income people of color. A disproportionate number of women with children and people of color are targeted for eviction and displacement every day, and that number has increased with the foreclosure crisis and today as speculation on land and housing intensifies. 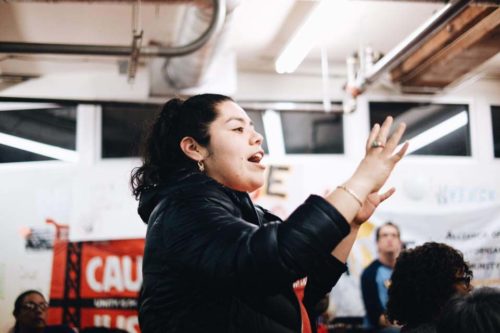 Early this month, tenant leaders and organizers from throughout the state gathered in Los Angeles to align our visions of housing justice, share strategies to build power, and move together across networks, across organizations, and across issues for a powerful response to the housing crisis, gentrification and displacement.

Hosted by Tenants Together, Alliance of Californians for Community Empowerment, Homes for All California, Right to the City, and Homes for All national, the statewide tenant organizer convening drew 125 tenant leaders and organizers from over 35 organizations across the state fighting for renters’ rights

The room was packed with folks eager and determined to end to evictions and rent increases, and demand (from the local, state and federal government) an investment in deeply affordable housing. We’ve had some wins. Last year we passed three new rent control and just cause for eviction laws for the first time in decades and plan to build on these.

Tenant organizers from rent control campaigns in 2015 and 2016 in Santa Rosa, Richmond, city of Alameda, and San Mateo, shared with us about what they learned in these recent campaigns. This is especially important as tenants in LA county, Sacramento, and San Diego start to organize their own campaigns.

More than 11.4 million extremely low income renter households in the U.S, whose income is no greater than 30% of their area median income (AMI) or the poverty guideline, face a shortage of 7.4 million affordable and available rental homes. The Gap: A Shortage of Affordable Homes reports that nationally, only 35 affordable homes are available for every 100 ELI renter households. A shortage exists in every state and major metropolitan area. [//nlihc.org/research/gap-report] 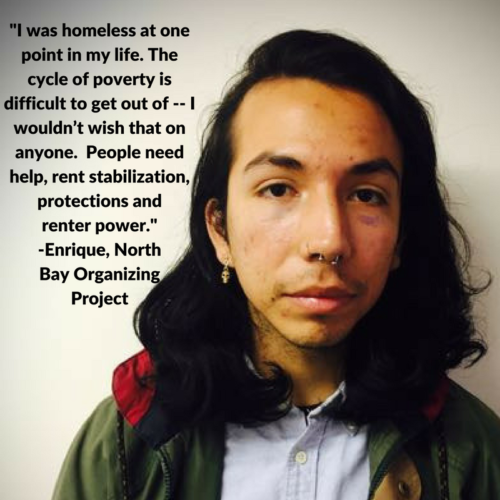 Enrique of the North Bay Organizing Project in Santa Rosa shared his own experiences around survival and housing. “I’m a student and sometimes I have to choose between eating and paying my rent, that’s a decision that’s very difficult to make. It’s a something I wish I didn’t have to make and I know a lot of other students who are dealing with this too.. I’ve [been] homeless…. and it wasn’t good. The whole cycle of poverty is difficult to get out of.  I wouldn’t wish that on anyone. People need help, rent stabilization, protections and power.”

To this, and other issues, large groups of people in animated conversations talked about best strategies to push for broad economic, racial and gender justice and advancing a vision of an economy that works for families, communities and the environment, not billionaire real-estate tycoons, corporate landlords and Wall Street bankers.

We talked about alternative visions of community development that centralizes the interest and needs of working-class communities of color.  As stated in our 2014 report, Development Without Displacement, written by Causa Justa and Alameda County Public Health Department, gentrification is not the inevitable result of economic development, but the result of fundamentally unjust economic development policies and the widespread public disinvestment from historically marginalized communities. Community organizing, collective power-building, and communal self-determination must form the foundation of any legislative, electoral, or policy strategy to prevent, combat, or reverse gentrification

“To me, housing justice means that everyone has a place to live, that is safe, affordable, quality and 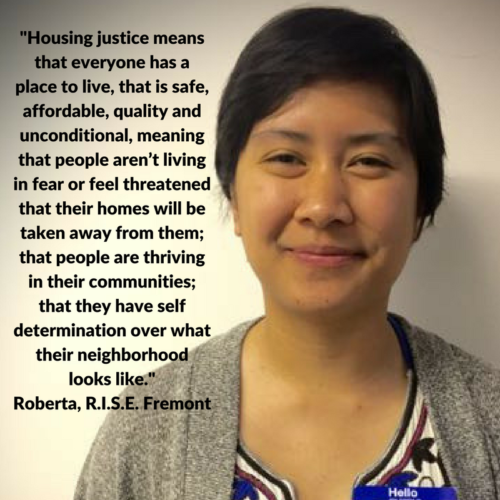 unconditional, meaning that people aren’t living in fear or feel threatened that their homes will be taken away from them, and that people are thriving in their communities,” said Roberta Ryan from R.I.S.E. Coalition in Fremont, a housing justice organization.

Organizing tenants is part of a broader movement and we looked for alignment, divergence, and anything missing in existing platforms for tenants’ rights and housing justice. We challenged ourselves to think of ways to build a movement that is inclusive and intersectional. 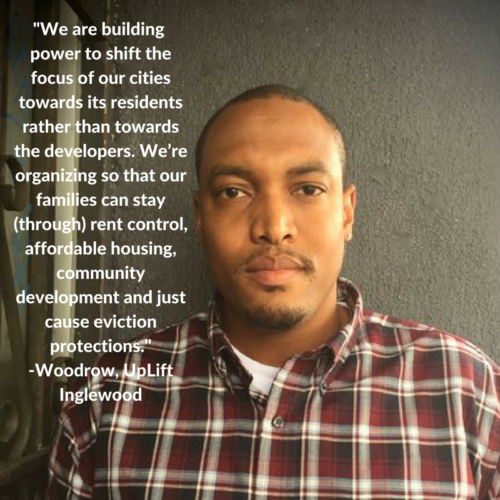 Over the course of the day we reviewed the history of tenant organizing in response to housing crises starting in the 1930s, including the role that redlining and redevelopment have had in shaping the nature of housing injustice today. Many took note that tenant organizing in the 60s and 70s took place alongside broader left movements.

We examined and debated where we want to go together. As we talked about our policy priorities we challenged ourselves to think about aligning the ways we go about the work.

How do we build power locally/trans-locally/statewide? How do we link our work to build power with other justice-oriented movements?

Our frontline communities are threatened on many levels in this political moment, including deportations, gender violence, and police violence. Landlords regularly target vulnerable communities for abuse and the work of tenants’ rights is very important in building a defense for our people in this moment.

Building a foundation needs strong pillars. Right to the City Alliance outlined in their report, Rise of the Renter Nation, accessibility, long-term stability, protection from displacement; health, sustainability and quality; and finally, community control are the most basic things we need to grow a housing movement too big to fail. 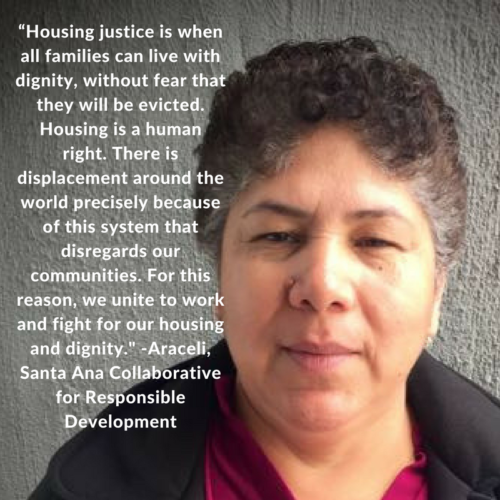 “Housing justice for me is when all families can live with dignity, without fear, where all members of a family can live together without fear that they will be evicted. Housing is a human right — not just for those with power and money or who have grand businesses leaving the community in the dust. There is displacement around the world precisely because of this capitalist system that disregards our communities. For this reason, we unite to work and fight for our housing and dignity so that families can live without fear [of being displaced and evicted].”

This is just the beginning. We’ll all meet again in the Fall in a similar and much larger assembly in the Bay Area to continue to build and align our work, develop and ratify a shared platform for housing justice. Why? Because Housing is a Human Right!